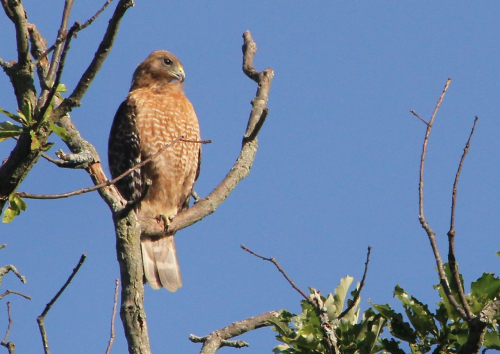 The Red-Shouldered Hawks of Allendale
A Free Zoom Talk by Jim Wright
Friday, October 28, at 7:30 p.m.

These endangered, magnificent hawks have made a remarkable recovery in Allendale, and can often be seen in the Celery Farm and elsewhere in town.

This past spring, a pair of adults had four young—the most in one brood ever—and all fledged.

Jim, a marsh warden at the Celery Farm,  monitors the nest for the state Department of Environmental Protection. He was able to document the hawk’s most recent nesting season and beyond with some great color photos.

Jim has written many books on nature and writes "The Bird Watcher" column for The Record.

The presentation is a partnership between Allendale's Lee Memorial Library and the Fyke Nature Association. The talk will start after an extremely brief meeting.

I will post the EventBrite link when it becomes available,

In the meantime, save the date.

These talks are funded by a generous grant from the Winifred M. and George P. Pitkin Foundation. 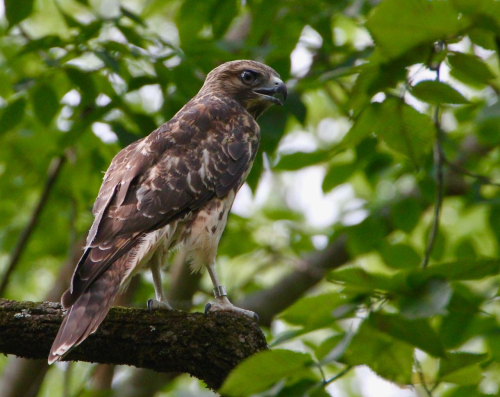 The young Red-shouldered Hawk that fell out of its Allendale nest in late May was released at The Raptor Trust near the Great Swamp after a 56-day rehab for a lung problem that likely occurred when it fell.

(The young hawk's sibling fledged and is doing well in Allendale.) 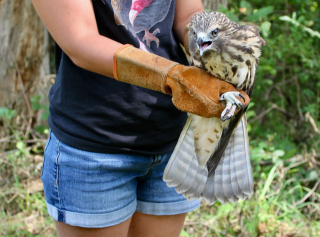 udging from the large band size, The Raptor Trust believes that the Red-shoulder is a female.  Since the sibling appears to be of a similar size, we figure the sibling is a female as well.

The Allendale Red-shoulder was released at The Raptor Trust with a second-year Red-shoulder from Chatham that had been rehabbed.

It was thought that the two may have bonded, and there was some concern about releasing the younger hawk back in Allendale so near the downtown area with its automobile traffic and other challenges, so the two were released together within a minute of each other at The Raptor Trust.

Both landed in nearby trees within shouting distance of one another.

Red-shouldered Hawks in New Jersey are endangered when nesting. The release of the Allendale Red-shoulder and her rehab mate was a bit of welcome news at a time when bird populations are in decline.

In honor of Allendale resident Susan Bailey, who first saw 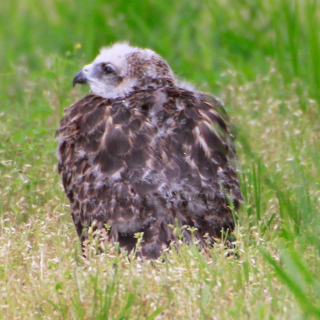 the nestling on the ground near its nest tree, we are naming Red-shoulder No. 1266-00175 "Susan." (Photo of fallen nestling Susan at right.)

In honor of Susan's neighbor Courtney, who also helped us monitor the nest, we are naming the sibling "Courtney."

Their entire neighborhood has been wonderful.

Naming the two young Red-shoulders is a tradition started by none of than Marsh Warden Emeritus Stiles Warden.

Red-shoulders have nested in Allendale and nearby Ramsey for two decades, with uneven success. The Raptor Trust has treated a few over the years.

In March 2008, a resident in Ramsey very near Allendale reported that a Red-shouldered Hawk had flown into a window there. Stiles and I took the dazed hawk to ... The Raptor Trust, where she was banded with Federal Band No. 2206-27509.

Stiles named her Laura after the woman who found her on the ground. We maintain that tradition by naming the two young Red-shoulders for Susan and Courtney.

(And a big thank you to fellow Celery Farm Deputy Marsh Warden Gaby Schmitt, who rescued the fallen Red-shoulder and took it to The Raptor Trust.)

P.S. The Lee Memorial Library has a copy of Survival, the book several of us did a decade ago about the Allendale Red-shoulders. Or you can download a free e-book copy here:

Tomorrow on the blog: A very short video of Susan the hawk's release -- plus a golden oldie video of Stiles Thomas releasing Laura (the hawk). 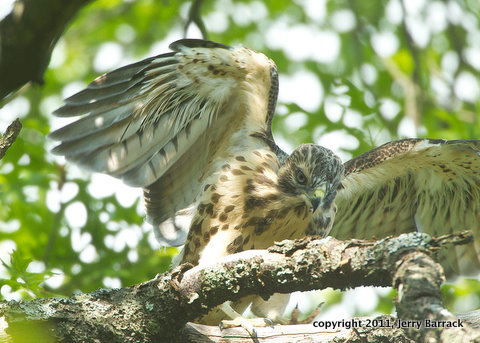 I have been waiting anxiously to be able to post this wonderful news:

The Red-shouldered Hawk pair in Allendale has had a successful nest. Their one offspring this spring, named Manfred by Marsh Warden Emeritus Stiles Thomas, has fledged and is flying around the area on his own.

Red-shoulders, which have lost most of their habitat statewide, are endangered when breeding and a threatened species in New Jersey year-round.  They have tried to nest in Allendale and nearby Ramsey for 10 years, and have produced just four fledglings.

I am writing about Manfred and his parents for my next "Bird Watcher" column in The Record. It will run on June 23.

(Above photo by Jerry Barrack, who has been photographing Manfred ever since the young red-shoulder first popped his fuzzy little head up. Thanks, Jerry!)

I wrote the following essay about the Allendale red-shouldered hawks for The Record three years ago. It gives all the essential background about the situation.