Hour on the Tower

Sept. 9  was the 32nd anniversary of the  record-setting Hour on the Tower, a record matched 19 years ago in October. I wrote about the notorious tie score in my journal at the time in 2003 ....

Here's a recap (some things have changed):

It’s called the Hour on the Tower, and here’s how it works. 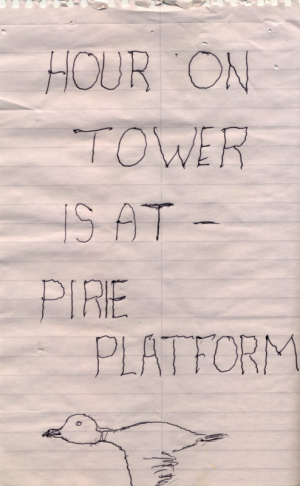 Every Sunday morning from 8 to 9, July through October, an informal group of birders meets at the Celery Farm Natural Area in Allendale to see how many species of birds they can see in exactly one hour.

Some Hours are better than others, and the one on Oct. 5 had the makings of a classic. The day before, birder savant and ring leader Stiles Thomas surveyed the abundant waterfowl on Lake Appert and proclaimed that this Sunday offered a shot at besting the record for most species seen during one Hour.

The record was not exactly chopped (Canada goose) liver. It had stood for more than 13 years, ever since the all-star team of Charles Mayhood, Mr. Thomas, and Gordon Schultze -– “in our prime,” Mr. Thomas quickly noted –- saw or heard 42 species between droll jokes one magical September Sunday.

For an idea of how awesome this is, consider that a crack team of birders recently perched on the Pirie Platform for 12 hours for the Big Sit and saw a total of 56 species – or just 14 more species in 12 times as much time.

(Editor’s note: This is why the event is the Big Sit and not the Big Watch.)

Yet few could have guessed how this Hour would turn out.

Mr. Thomas, ever the field marshal, decided the best strategy for this Sunday in 2003 was to use the record-setting Pirie Platform. After all, ducks are the main course on Lake Appert’s menu this time of year, and there’s only one place, a quarter rotation around the lake, to really see ducks.

Anyone arriving at the Pirie Platform at 8 a.m. on this day was late. By then, the platform was so crowded it could have been called Sardinia. The hard-core birders – binoculars and high-powered spotting scopes in tow – had arrived much earlier and had begun their warmups.

If they weren’t doing index-finger stretches, they were checking wind speed and direction or practicing their tripod pivots.

On the waters of Lake Appert, sitting ducks awaited by the dozen, a veritable avian armada. When the clock started, birders started naming waterfowl by the binocularful – Green-winged Teal, Wigeons, Mallards, Pied-billed Grebes, Wood Ducks, Mute Swans, Ruddies, Shovelers, dreaded Canada Geese, you name it. The birders espied hawks as well – a Red-tail, a Kestrel, a Northern Harrier. It would be only a matter of time before they saw the resident Osprey, as predictable as a kingfisher on a Wood-Duck box.

By 8:30, the count was well past 20, and Mr. Thomas’ prediction of a record was looming large. Sure, one of the Eagle-eared birders had heard Coots and Mockingbirds that mere mortals had missed – unconfirmed and thus uncounted – but the A-Team was on a roll. And so what if a Nuthatch sighting couldn’t be confirmed? The crack squad was picking off birds like a Cooper’s Hawk at a feeder.

As the hour wound down, the count was up to 40 – just two shy of the record. The final countdown was on. Binoculars frantically scoured the horizon, combed the treetops, and scrutinized the shoreline. Zippo.

Under a minute left. Nothing. The clock ticked down, to an empty sky. Then, in the last seconds ... could it be? Yes, a Sharpie arrived just in time to be counted. Moments later, time was up. The birders were one bird short of the record: 41 bird species, plus a wayward raccoon for good measure.

Seconds later, the resident Osprey arrived, too late to count.

As the birders headed for the parking lot, Mr. Thomas soon heard the call of the taunting Mockingbird (sounding especially mocking). A stop at the Warden’s Watch produced two Coots and a Nuthatch.

Those additional birds – birds heard but not confirmed, plus the Osprey who had been atypically late – would have brought the total to a record-smashing 45.

Too bad that birds don’t know from clocks.

As it turned out, too bad that birders don’t know from counting.

For posterity’s sake, this lesser yellow scribe thought it would be instructive to print the record-setting list from 1990, along with the list from October 5, 2003.

What exotic birds were seen? What birds were seen both years? And, curiously, what common birds – like Wagtails, Manikins, and Auks – had managed to elude the birders’ watchful eyes?

Then came the bombshell: As this journalist transcribed the list, he discovered that the anonymous bird counter on that 1990 Sunday had done the unthinkable. He had counted the same species twice. It is bad enough to count one’s chickens before they hatch; to count one’s chickens inaccurately after they’ve hatched is simply not done.

That’s the way life works. Sometimes things aren’t always what they were cracked up to be. The 1990 record was actually 41 species, and the 2003 upstart team had tied it – albeit with twice as many eyes.

Thus, instead of trudging from the platform with those so-close-yet-so-far grimaces, the October 5 birders could have been celebrating and giving each other medium-fives (high-fives being reserved only for record-setting performances).

Hour on the Tower Report from Early April 2007

Note: This was supposed to be one of the first posts on my blog ever, nine years ago, but I never posted it for some reason. I post it now for historical value:

Birders at the Celery Farm have a tradition known as the Hour on the Tower, and it has started up once again for 2007.

The idea is for a group to assemble at an observation platform and see how many different species they can see in exactly hour. The group typically gets together at 8 a.m. on the Celery Farm's Pirie Platform, and attendance can range from one or two to a dozen people of assorted birding skills.

If you like birding and a bit of banter -- and don't cringe at getting up early on a Sunday -- check it out.

Continue reading "Hour on the Tower Report from Early April 2007" »

Hour on the Tower: Time Change 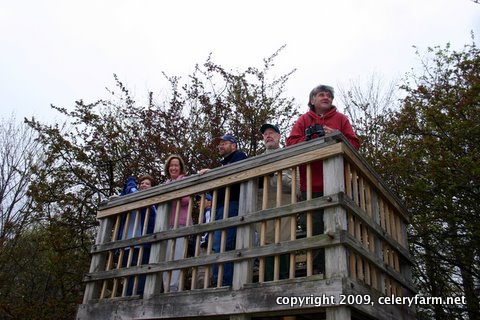 Darlene Lembo, keeper of all things Hour on the Tower, has decreed:

Starting next Sunday, September 6, we will be having the Hour on the Tower from 8 to 9 a.m. Still at the Pirie Platform.

Out-of-town birds will still be counted until further notice.

For background on the Hour on the Tower, click here. 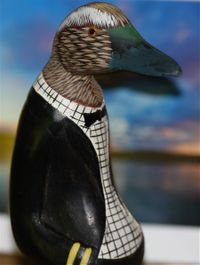 You heard it here first:  Starting this Sunday, May 17, the humans plan to begin their weekly Hour on the Tower an hour earlier.

In other words, the cult of the glassy-eyed binocular worshipers will arrive at 7 a.m. instead of the usual 8 a.m.

Needless to say, all birds should adjust their schedules to avoid detection.

The names of all avian species ignoring this caveat each Sunday will be posted on this blog later that week.

Take it from me, Seymour Drakes Esq., these humans think nothing of naming names.

Darlene Lembo reports that The Hour on the Tower had 29 species on Apr. 26 -- including a Green Heron and a Solitary Sandpiper.

Click here for background info  on the Hour on the Tower.
Click "Continue reading ..." for the tally.

Darlene Lembo reports that her crack team of birders had 27 species during the HOTT. Click immediately below for the full list.