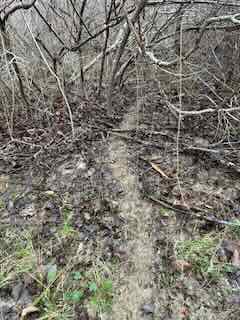 Recently, while walking a path in Mass Audubon's Ashumet Wildlife Sanctuary on Cape Cod, friends and I came across a weird sight: what appears to be the slide marks (above) of a critter being dragged across the path.

I took a photo of the tracks, but they are hard to see. (Sorry.)

What do you think was going on?

Birder and photographer Kevin Watson returns with a program about the incredible wildlife in Africa. This will be a "highlights show," with Kevin's best images from visits to three countries, Zambia, Kenya and Uganda.

There will be large mammals - lions, leopards, elephants, giraffes, hippos and so on. But Africa is also home to an amazing variety of bird life, and Kevin will present images of many of the star attractions, including Hornbills, Bee-eaters, Turacos, Owls, Eagles and the prehistoric-looking Shoebill.

Kevin is a terrific speaker. Not to be missed!

The talk is free and open to the public.

The Municipal Building is at 500 W. Crescent Ave. in Allendale. The talk will be on the second floor.

This presentation will be live. It will also be videotaped.

The resulting video will be posted on YouTube with a link provided to all members for whom we have an email. Those who missed the meeting can view it at home at their convenience.

Since 2015 Fyke's monthly speaker costs have been funded by a generous grant from the Winifred M. and George P. Pitkin Foundation.

Stopped by High Mountain's Buttermilk Falls at Scioto Drive to see how it was doing after the recent heavy rains.

The Clove Gets a Big Prune 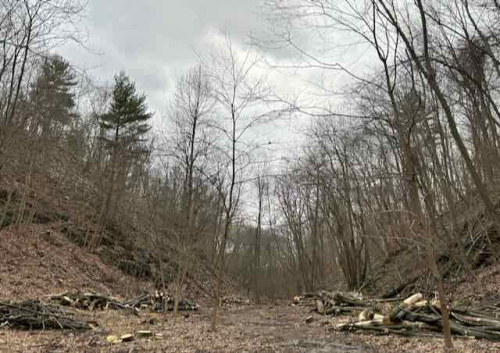 Stopped by the Clove at High Mountain yesterday to see first-hand what I had heard by email -- that The Nature Conservancy took major action against all the invasive Ailanthus trees that had grown up there during the past few decades.

The trees had become Spotted Lanternfly magnets in the past couple of years -- and had to go.

There had to be at least seven huge piles of Ailanthus logs.

As a result, the Clove looks a lot more like in the days of yore. (Thank you, TNC!)

Rat Poisons in the News

This Cooper's Banded in Cape May in 2021, was found dead in Cresskill last summer. Cause of death: rat poison.

As readers of this blog may know, several local environmental groups have joined the campaign against rat poison bait stations after the deaths of at least a half-dozen hawks and owls in our region in the past 18 months.

In each case, we asked that the dead raptors to be tested for the rat poisons used in these bait stations -- and the NJ State lab confirmed death by rat poison in nearly every case.

The Raptor Trust, a wonderful group,  has seen so many raptors that have died with all the signs of rat poisoning that they no longer ask that the raptors be tested -- lest they burden the state when the cause of death is so apparent.  A sad situation.

Our goal is to get a statewide ban.

At times, I feel like we are tilting at windmills, but nature lovers in other states are faring better -- thanks to the help of a great group, Raptors Are the Solution.

Last week, we filed suit against Bell Laboratories for making false claims about its rat poisons, including that they are "sustainable" and "earth friendly." Read more here:

Meanwhile, our ongoing work with activists in Connecticut and New Hampshire contributed to both states introducing bills this (new) year to ban the worst of the poisons. British Columbia made its moratorium on these poisons permanent.

It can be done.