Home Archives Profile Subscribe About Jim
Was This Painted in Bergen County?
Great Story on Our Regional Hawk Watches 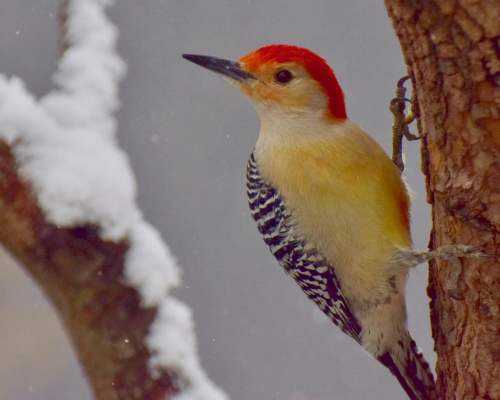 My latest "Bird Watcher"  column for The Record  is all about Project FeederWatch. With a photo by Barbara Dilger. (Thanks, Barbara!)

Backyard bird-watching is one of life’s simple

pleasures. For the inquisitive, it can also be a wonderful gateway to learn more about the nature around us.

This time of year, one of the best tools to expand that gateway is Project FeederWatch, a citizen science program that encourages birders to register their backyard sightings into a database – and to tap into the unparalleled resources of the Cornell Lab of Ornithology.

The program asks participants to count the birds of the various species in their yards for two consecutive days each week as time allows, and then to input the information into Cornell’s database via their computer or a mobile app.

Over the past three decades, participants have created an enormous database of changes in bird populations. Some 30,000 bird watchers in the United States and Canada took part last season.

This fall, there’s a new wrinkle. “We are encouraging people without feeders to ‘FeederWatch,” says Emma Greig, the project’s leader. “It seems counterintuitive, but actually the only way we can study the impact of feeding birds is by looking at places that do and don’t feed birds, and then comparing them.”

The research is aimed at getting a better handle on how all those bird feeders impact bird populations.  “That’s why participating in FeederWatch – including if you don’t feed birds – is incredibly important,” she says.

The new counting season kicked off last week, but there’s still plenty of time to participate. The program runs through next April.

Project Feeder watch costs $18 a year to join. The money goes toward paying for staff, website, mobile app, and more. In addition to getting a 2023 calendar and bird-identification poster, participants can access an incredible birding database.

For example: Can you name the most common birds at New Jersey feeders last FeederWatch season?  The website’s answer: mourning doves, blue jays, cardinals, and – you may have guessed it – dear old dark-eyed juncos.

Greig says not to worry if you can’t count your backyard birds every week. “Sometimes people are intimidated by FeederWatch because they think it’ll take a lot of time or they won’t be able to identify all the birds around their home,” she says. “It can take as little time as you wish. Even one count all winter is useful. And with the identification help we provide through the program, anyone can master the dozen or so species they are likely to see.”

I like the idea of signing up for a two-day count every week. I hate to admit it, but I need the structure. It’s also an incentive to keep those feeders full – and to look out the window more often.

With the crazy holiday season around the corner, appreciating our avian neighbors is a great way to chill.

For more info or to sign up, go to feederwatch.org.

My latest "Bird Watcher"  column for The Record  is all about Project FeederWatch. With a photo by Barbara Dilger. (Thanks, Barbara!)