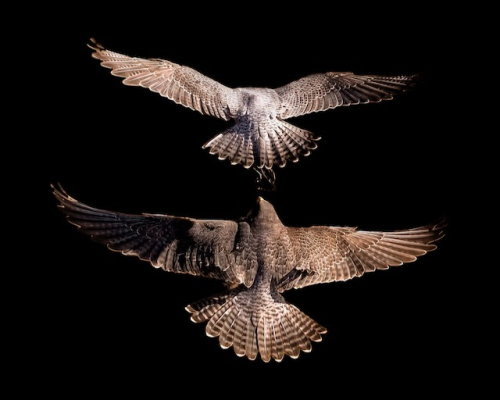 Greenstone’s favorite image in his show features a bird-eye view of two peregrine falcons.
My latest column for The Record is about an exhibit of Peregrine Falcon photos by Wayne Greenstone.

If you love seeing beautiful images of one of the most 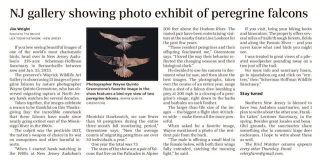 charismatic birds in the world, head over to New Jersey Audubon’s 276-acre Scherman-Hoffman Sanctuary in Bernardsville between now and Jan. 25.

Taken together, the images celebrate a reason to be thankful on this Thanksgiving Day: the incredible comeback that these falcons have made since nearly going extinct east of the Mississippi River in the 1960s.

The culprit was the pesticide DDT, the nation’s weapon of choice in its war on mosquitoes and other harmful insects.

“When I started hawk-watching in the 1980s at New Jersey Audubon’s Montclair Hawkwatch, we saw fewer than 10 peregrines during the entire three-month fall monitoring period,” Greenstone says. “Now the average counts of migrating peregrines are over 30 individuals a year.” One year the total was 73.

The stars of the show are a pair of falcons that live on the Palisades in Alpine 500 feet above the Hudson River. The mated pair have been entertaining visitors at the nearby State Line Lookout, for the past few years.

“Those resident peregrines and their offspring fascinated me,” Greenstone says. “I loved the way their behavior reflected the changing seasons and their biological clock.”

He decided to use his camera to document what he saw, and then share the best images. The photographs, taken over the course of an entire year, range from a shot of a falcon dive-bombing a prey at 200 mph to a closeup of a peregrine’s visage, right down to the barbs and barbules on each feather.

The larger-than-life size of the images – the biggest a flight shot 40 inches wide – makes them all the more powerful.

Forced to choose a favorite image, Wayne reluctantly picks a photo of the resident pair from the back. “The male is offering a small bird to the female below, with both their wings fully extended, catching the morning light.”

If you visit:  Be sure to bring your hiking boots and binoculars. The property offers several miles of trails through forests and fields and along the Passaic River, and you never know what cool birds you might see. I was treated to great views of a pileated woodpecker pounding away on a tree just off the trail.

For more info and sanctuary hours, go to: https://njaudubon.org and click on “centers,” then “Scherman Hoffman Wildlife Sanctuary.”

Northern New Jersey is blessed to have two Audubon sanctuaries, and I plan to write about the other one, Franklin Lakes’ Lorrimer Sanctuary, next spring. Besides great locales and beautiful grounds, the sanctuaries share something else in common – large deer exclosures. I hope to write about these as well.

The Bird Watcher column appears every other Thursday. Email Jim at

Greenstone’s favorite image in his show features a bird-eye view of two peregrine falcons.
My latest column for The Record is about an exhibit of Peregrine Falcon photos by Wayne Greenstone.