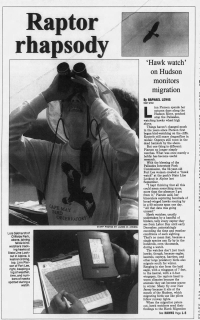 When a friend asked if I remembered the woman who started the State Line Hawk Watch,  I said yes -- and did some research.

Most important, I came across the following 1998 story.

It says: The hawk watch was started in 1997, making this year the 25th anniversary of its founding:

Linn Pierson spends her autumn days along the Hudson River, perched atop the Palisades, watching hawks wheel high above.

Things haven't changed much in the years since Pierson first began bird-watching on the cliffs. Kestrels still snare dragonflies in midair. Ospreys still roost in the dead hemlock by the shore. But one thing is different: Pierson no longer simply watches. What was once merely a hobby has become useful research.

With the blessing of the Palisades Interstate Park Commission, the 52-year-old Fort Lee woman created a "hawk watch" at the park's State Line Lookout in Alpine last September.

"I kept thinking that all this could mean something more, more than the pleasure I got from it," Pierson said, her binoculars capturing hundreds of broad-winged hawks soaring by in a 90-minute span one day. "All that data was going unused."

Hawk watches, usually undertaken by a handful of birders, tally every raptor they see from Labor Day until early December, painstakingly recording the time and weather conditions of each sighting.

That's no mean feat, because a single species can fly by in the hundreds, even thousands, during a watch. The watches don't just track hawks, though, because eagles, kestrels, ospreys, harriers, and other large predatory birds also migrate south for winter.

Ranging in size from the bald eagle, with a wingspan of 7 feet, to the kestrel, with a 2-foot wingspan, the raptors head to warm climates because the animals they eat become scarce in winter. Many fly over New Jersey because it sits at the mouth of the Hudson, which migrating birds use like pilots follow runway lights.

When the migration peters out, hawk watchers send their findings to the Hawk Migration Association of North America (HMANA), a volunteer organization that analyzes the numbers to better understand the birds' habits and the state of each species.

Nationwide, nearly 2,000 groups conduct hawk watches, according to HMANA, although only about 800 are thought to be active at any one time. New Jersey has 10 hawk watches. Some, like the ones conducted in Montclair, Cape May, Sandy Hook, and Boonton, have been around for years.

Pierson who works part-time for a flower shop and occasionally for the state Department of Fish, Game, and Wildlife has created Bergen County's first watch. And if you ask her, choosing the Palisades was a stroke of genius.

"I get a lot of abuse from my fellow  watchers because I can drive right up to my watch and there's a restaurant and bathrooms," Pierson said. "All the other ones, you have to walk like a quarter-mile uphill. We're actually wheelchair-accessible, and the birding here is fantastic."

William Barnard, chairman of HMANA and a biology professor at Vermont's Northfield University, says hawk watches are an inexact science, but important nonetheless.

"Hawk watches are barometers, not only of the hawks, but of the animals they eat," Barnard said. "If the hawk watches see a decrease in the number of sharp-shinned hawks, for example, there's a good chance that something has happened. It can raise a red flag. Perhaps a nation in South or Central America has begun using a harmful pesticide, and the songbirds are eating the insects, and the hawks are eating the songbirds."

Mid-September, she said, is one of the busiest and most exciting periods. Early Friday, as she does every weekend in the fall, Pierson set up shop at a scenic outcropping at the State Line Lookout, which sits 532 feet above the Hudson.

Before her sat an empty data sheet, a Tweety Bird watch, a guide book, a thermometer, a pack of cigarettes, and a cup of coffee. A pair of binoculars hung around her neck, and a high-powered scope stood on a tripod beside her.

She clutched a counting device in her hand, which she clicked feverishly as "kettles" emerged.

A "hawk watch" tracks the migration of avian predators called raptors, a term used for dozens of species of eagles, hawks, falcons, harriers, kites, condors, and osprey. The largest raptor, the California condor, has a wingspan of 9 feet. The smallest, the American kestrel, has a wingspan of 2 feet.

The ospreys, or sea eagles, that live by the Palisades, have a wingspan of around 6 feet. Raptors, with their viselike talons, prey on song-birds, small rodents, snakes, and other reptiles. Because much of their food source either hibernates or migrates south in winter, nearly all hawks and eagles also migrate.

Beginning in September, the raptors begin to fly south, many from northern Canada. By early December, they will have traveled thousands of miles. of hawks soared overhead. When migration is going full swing, her hand aches. But by 10 a.m. Friday, there still wasn't much action.

"On a good day, the broad-wings look like a funnel cloud when they ride the thermals, that's how many there are," she said. "They go up and up, riding the air, then peel off and glide south for two, three miles without flapping their wings. That's how they migrate. It's impressive."

Moments later, John Sherry, a New York City firefighter who lives in Orange County, joined Pierson. He is one of several regulars who show up to give Pierson a hand in spotting and counting hawks as they travel by. Sherry spotted a good one almost immediately.

"I lived in New York my whole life and every bird I ever saw was a pigeon," Sherry said, focusing on a northern harrier circling high to the northwest. "Then, I moved up state and the first thing I saw was a turkey vulture. I said, 'What are these things, pterodactyls?' So I took a class on hawks, and things took off from there."

Pierson, too, was startled by her first clo-up look at a hawk. Thirteen years ago, she moved into a new home in Fort Lee, and thought a couple of bird feeders might spruce up the yard. That decorative decision changed her life.

"One day, I looked out my window and said, 'What's a chicken doing on my lawn?' " Pierson said. "Well, it was a sharp-shinned hawk, and he was eating a sparrow. He kept visiting me throughout the winter, and I just fell in love."

Thanks to the hawk watch, Pierson is spreading the gospel. Because the watch is located at a scenic overlook, commuters on the Palisades Interstate Parkway, tourists, and park employees have stopped by. Many have come back for more, Pierson said.

Eric Nelsen, special events coordinator for the park's New Jersey section, is one of them.

"All my life, this show has been going on over my head and I never knew it," Nelsen said, squinting in the late-morning sun as Pierson and Sherry observed a pair of ospreys circling above the water. "Now, I'm aware. It's really an eye-opener."

Park officials, hoping to boost interest in the hawk watch, are hosting "Mad About Hawks," an educational show featuring 20 live birds, at State Line Lookout from 11 a.m. to 4 p.m. on Oct. 3.

"This is what we exist for," Nelsen said. "I think it's fantastic that Linn approached us."

By the early afternoon, Pierson and her friends had spotted American kestrels, northern harriers, ospreys, sharp-shinned hawks, and broad-winged hawks by the dozen.

"I go home at night and this view here, of the cliffs and the hawks and the sky, it's superimposed on my eyes like a screen saver when I go to bed at night," Pierson said. "It's tough work, but somebody has to do it."

To find a hawk watch near you, point your Internet Web browser to www.hmana.org

My Sept. 1 "Brd Watcher" column the fall migration is here:

Posted by Jim Wright at 09:37 AM in Stateline Lookout | Permalink | Comments (2)

When a friend asked if I remembered the woman who started the State Line Hawk Watch,  I said yes -- and did some research.

Most important, I came across the following 1998 story.

It says: The hawk watch was started in 1997, making this year the 25th anniversary of its founding: