A Wonderful 2007 Obituary for Linn Pierson 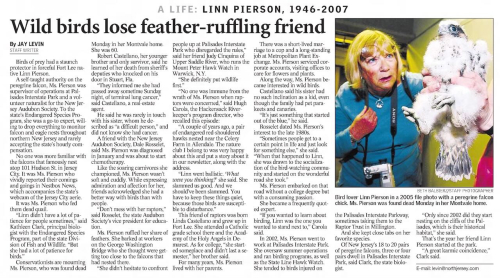 Now that we know that this is State Line Hawk Watch's 25th anniversary, I thought I should post this great obituary about the hawk watch's founder, Linn Pierson, who died 15 years ago.

By JAY LEVIN STAFF WRITER
Birds of prey had a staunch protector in forceful Fort Lee native Linn Pierson. A self-taught authority on the peregrine falcon, Ms. Pierson was supervisor of operations at Palisades Interstate Park and a volunteer naturalist for the New Jersey Audubon Society.

To the state's Endangered Species Program, she was a go-to expert, willing to drop everything to monitor falcon and eagle nests throughout northern New Jersey and rarely accepting the state's hourly compensation.

"Linn didn't have a lot of patience for people sometimes," said Kathleen Clark, principal biologist with the Endangered Species Program, part of the state Division of Fish and Wildlife. "But she had a lot of patience for birds." Conservationists are mourning Ms. Pierson, who was found dead Monday in her Montvale home. She was 60. Robert Castellano, her younger brother and only survivor, said he learned of her death from sheriff's deputies who knocked on his door in Stuart, Fla.

"They informed me she had passed away sometime Sunday night, of terminal lung cancer," said Castellano, a real-estate agent. He said he was rarely in touch with his sister, whom he described as "a difficult person," and did not know she had cancer.

A friend with the New Jersey Audubon Society, Dale Rosselet, said Ms. Pierson was diagnosed in January and was about to start chemotherapy.

Like the soaring carnivores she championed, Ms. Pierson wasn't soft and cuddly. While expressing admiration and affection for her, friends acknowledged she had a better way with birds than with people.

Ms. Pierson ruffled her share of feathers. She barked at workers on the George Washington Bridge who she thought were getting too close to the falcons that had nested there.

"She didn't hesitate to confront people up at Palisades Interstate Park who disregarded the rules," said her friend Judy Cinquina of Upper Saddle River, who runs the Mount Peter Hawk Watch in Warwick, N.Y. "She definitely put wildlife first."

"No one was immune from the wrath of Ms. Pierson when raptors were concerned," said Hugh Carola, the Hackensack River-keeper's program director, who recalled this episode: "A couple of years ago, a pair of endangered red-shouldered hawks nested near the Celery Farm in Allendale. The nature club I belong to was very happy about this and put a story about it in our newsletter, along with the address.

"Linn went ballistic. 'What were you thinking? she said. She slammed us good. And we should've been slammed. You have to keep these things quiet, because those birds are susceptible to disturbance."

This friend of raptors was born Linda Castellano and grew up in Fort Lee. She attended a Catholic grade school there and the Academy of the Holy Angels in Demarest.

As for college, "she started someplace and didn't last a semester," her brother said.

For many years, Ms. Pierson lived with her parents. There was a short-lived marriage to a cop and a long-standing job at Metropolitan Plant Exchange.

Ms. Pierson serviced corporate accounts, visiting offices to care for flowers and plants. Along the way, Ms. Pierson became interested in wild birds. Castellano said his sister had no such inclination as a kid, even though the family had pet parakeets and canaries.

"It's just something that started out of the blue," he said.

Rosselet dated Ms. Pierson's interest to the late 1980s. "Sometimes people get to a certain point in life and just look for something else," she said. "When that happened to Linn, she was drawn to the socialization of the bird-watching community and started on the wonderful road she took."

Ms. Pierson embarked on that road without a college degree but with a consuming passion. She became a frequently quoted expert. "If you wanted to learn about birding, Linn was the one you wanted to stand next to," Carola said.

And she kept close tabs on her favorite species.

Of New Jersey's 18 to 20 pairs of peregrine falcons, three or four pairs dwell in Palisades Interstate Park, said Clark, the state biologist. "Only since 2002 did they start nesting on the cliffs of the Palisades, which is their historical habitat," she said.

That's the year her friend Linn Pierson started at the park.

A Wonderful 2007 Obituary for Linn Pierson

Now that we know that this is State Line Hawk Watch's 25th anniversary, I thought I should post this great obituary about the hawk watch's founder, Linn Pierson, who died 15 years ago.