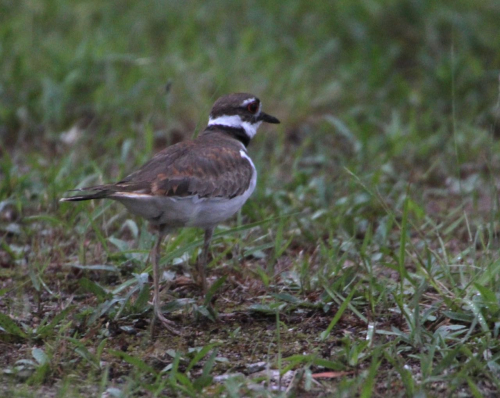 Killdeer nest every few years at the park, so please give them a wide berth. They are amaing birds.

Here's a "Bird Watcher" column I wrote about these charming shorebirds six years ago when another Killdeer nested at  -- you guessed it --Crestwood Lake.

Before birding took me under its wing, I used to run lunchtime laps on Fairleigh Dickinson’s old quarter-mile oval in Teaneck.

One day as I headed down the backstretch, a strange bird popped up and darted ahead of me. Although it appeared to have a broken wing, I couldn’t keep up. At the end of the straightaway, it flew off, and I thought our little competition had ended.

But once I reached the backstretch again, there stood that crazy bird, daring me to race. So I did, and off it went, screaming like a demented dentist’s drill.

With the same result. Two more laps, two more defeats for Jimbo. I gave up.

Back at work, I described my strange encounter to a bird-watching friend. She knew immediately what had happened: I was too close to the nest of a shorebird called a killdeer, and its defense strategy was to lure me away from the nest with its broken-wing schtick. Over and over.

Since then, I have encountered nesting killdeer many times, and I now know to leave them alone. Sometimes, however, the killdeer decide to have a family in the worst possible place, like the pair of killdeer currently nest in the parking lot of my local swimming lake.

How were the killdeer to know the lake would open for the summer after the female had laid four eggs under a shade tree? How were they to know that the spot was one of the prime places to park on a hot summer’s day?

When an acquaintance told me about the nest, I jumped into action. I marked off the nest site with yellow caution tape, and a homemade sign that proclaimed: “CAUTION: Ground-Nesting Birds  Do Not Disturb!”

Calling it a nest is being generous. It’s just a small depression in the grass and gravel, cradling four eggs exquisitely camouflaged to blend in with the ground. If you didn’t know they were there, you’d never see them -- or realize that you had driven over them with your car. Hence the warning sign.

So far, so good. But when that violent thunderstorm hit North Jersey early last week, I had visions of the brown-speckled eggs getting swept away in a torrent of water and pebbles. Fortunately, when I checked the next day, the nest was like Francis Scott Key’s star-spangled banner -- still there. For all their dentist-drill whining, these birds are tough dudes.

Although killdeer are classified as shorebirds, I’ve never seen one at the beach, a la their plover cousins. But I have seen them in the Meadowlands in late February, sitting on piles of snow by the side of the road -- among the first birds to arrive back on territory each year.

I’m not sure when the killdeer head back south or how far they travel, but I’ve occasionally seen some in North Arlington on Christmas Bird Counts, so I am guessing many don’t go much past the Mason-Dixon Line.

Killdeer eggs take 22-28 days to incubate, and the babies arrive with downy feathers and their parents’ trademark black necklace. The youngsters starting zipping around the day they hatch, which means folks parking at the local lake have to be on their toes (and brake pedals).

BTW, did I mention the killdeer may have another batch of eggs this summer?

A nifty Audubon Magazine story on Killdeer is here:

Killdeer nest every few years at the park, so please give them a wide berth. They are amaing birds.

Here's a "Bird Watcher" column I wrote about these charming shorebirds six years ago when another Killdeer nested at  -- you guessed it --Crestwood Lake.