My Column: Red Knots in Trouble? 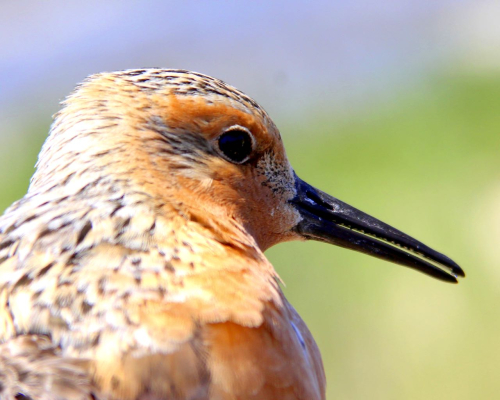 Here's my latest column for The Record and other USA Today newspapers in New Jersey -- on the plight of the Red Knot:

Not to sound like a gloomy Gus, but I am still a bit saddened by a recent conversation I had with wildlife biologist Larry Niles, who has worked to save endangered species in New Jersey for several decades. 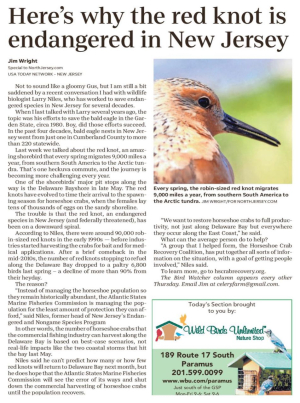 When I last talked with Larry several years ago, the topic was his efforts to save the bald eagle in the Garden State, circa 1980. Boy, did those efforts succeed. In the past four decades, bald eagle nests in New Jersey went from just one in Cumberland County to more than 220 statewide.

Last week we talked about the red knot, an amazing shorebird that migrates 9,000 miles a year from southern South America to the Arctic tundra every spring. That’s one heckuva commute, and the journey is becoming more challenging every year.

One of the shorebirds’ major pit stops along the way is the Delaware Bayshore in late May. The red knots have evolved to time their arrival to the spawning season for horseshoe crabs, when the females lay tens of thousands of eggs on the sandy shoreline.

The trouble is that the red knot, an endangered species in New Jersey (and federally threatened), has been on a downward spiral.

According to Niles, who has researched and championed the red knot for decades, the robin-sized shorebird’s numbers were around 90,000 in the early 1990s, before industries started harvesting the crabs for bait and for medical applications. After a brief comeback in the mid-2010s, the number of red knots stopping to refuel along the Delaware Bay dropped to a paltry 6,800 birds last spring – a decline of more than 90 percent from their heyday.

The reason? “Instead of managing the horseshoe population so they remain historically abundant, the Atlantic States Marine Fisheries Commission is managing the population for the least amount of protection they can afford,” said Niles, former head of New Jersey’s Endangered and Nongame Species Program.

In other words, the number of horseshoe crabs that the commercial fishing industry can harvest along the Delaware Bay is based on best-case scenarios, not real-life impacts like the two coastal storms that hit the bay last May.

Niles said he can’t predict how many or how few red knots will return to Delaware Bay next month, but he does hope that the Atlantic States Marine Fisheries Commission will see the error of their ways and shut down the commercial harvesting of horseshoe crabs until the population recovers.

“We want to restore horseshoe crabs to full productivity not just along Delaware Bay but everywhere they occur along the East Coast.”

What can the average person do to help? “A group that I helped form, the Horseshoe Crab Recovery Coalition, has put together all sorts of information on the situation, with a goal of getting people involved,” said Niles.

To learn more, go to hscrabrecovery.org

My Column: Red Knots in Trouble?

Here's my latest column for The Record and other USA Today newspapers in New Jersey -- on the plight of the Red Knot: