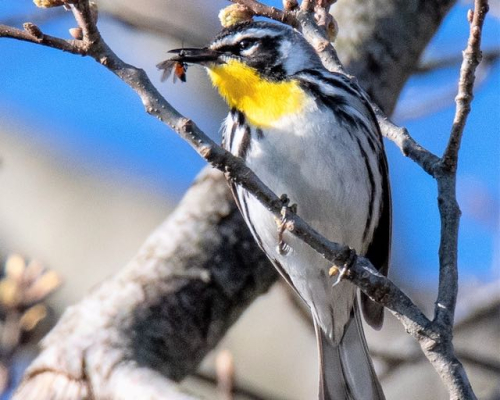 This rare yellow-throated warbler was a recent crowd-pleaser for a variety of reasons.

My column for The Record and other USA Today newspapers in New Jersey is about the rare (for here) Yellow-throated Warbler that visited the Celery Farm this month. With a great photo by John Pastore, above.

After a long Covid winter and a spate of depressing news about wild birds, I was feeling a bit overwhelmed and out-of-sync this month.

appeared in the nature preserve just beyond my backyard in Allendale, and everything changed for the better.

The bird in question was a yellow-throated warbler, rare for this area and only the fourth time it had been seen in the preserve.  (Not to be confused with the much more ordinary yellow-rumped warbler and common yellow-throat.)

The warbler wintered in Central America and overshot its breeding grounds. In New Jersey, it typically doesn’t migrate much farther north than Cape May County.

What’s more, the warbler was photogenic, dynamic and “cooperative,” a bird-watcher term meaning “largely oblivious to us humans.” This meant that onlookers got some great views (and some great photos) of the slender warbler.

Because it paid no-never-mind to people, it would flit around and then disappear for a half-hour sometimes, so nobody tired of seeing it. By unintentionally playing hard to get, people got more excited when it rematerialized.

Not only that, but the yellow-throated warbler enjoyed the outdoor dining in the preserve so much that it has stuck around for more than a week. That meant that hundreds of birders have seen this dynamo – a “life bird” for many.

Wait, there’s more. The yellow-throated warbler’s arrival touched off something called the Patagonia Picnic Table Effect, named after an outdoor dining spot in Arizona where a rare bird showed up and attracted similar crowds. While the folks that gathered in Arizona were looking for something called a rose-breasted becard, they saw lots of other wonderful birds.

Ditto in Allendale. People reported pine warblers, gnat-catchers, towhees, kinglets, and an osprey – not to be outdone – catching a catfish for lunch. In short, a good time was had by all.  Over four days, no less.

Finally, many experienced a phenomenon that I just invented a term for – the Francis Scott Key Effect. That’s when people show up early in the morning to see if a certain rare bird, if not the flag, was still there.

By now, the yellow-throated warbler has likely headed off one night under the cover of darkness, living up to that old show-biz axiom, leave ‘em wanting more.

But even more enjoyable than seeing the rare bird was seeing old friends I hadn’t seen since before the pandemic, and making new acquaintances.

We swapped bird stories and sightings, and I realized how much I missed being a part of this loose-knit community, a bunch of people often with little in common except for a love of feathered critters and nature.

Some days we all could use a ray of sunshine. When that yellow-throated warbler dropped by unexpectedly, I got mine at a very needed time. That may be the best part about birding of all.

This rare yellow-throated warbler was a recent crowd-pleaser for a variety of reasons.

My column for The Record and other USA Today newspapers in New Jersey is about the rare (for here) Yellow-throated Warbler that visited the Celery Farm this month. With a great photo by John Pastore, above.