The rat-poison problem is gaining attention across the U.S. and Canada. (British Columbia has banned the nastiest ones, the so-called "second generation" anticoagulant rodenticides.

Here's a video from Valentine's Day weekend from the International Owl Center in Minnesota by rodenticide and Barn Owl expert Sofi Hindmarch that explains the problem, and what can be done.

(A big thank you to the International Owl Center for creating this video.)

21-23:00: Why these "second generation" anticoagulant rodenticides are so nasty

39:00: How these poisons accumulate in the environment (like lead and DDT)

1:11: Rodenticides should be used as a last resort, and not permanently

On Friday and Saturday, a young Bald Eagle was on the ice on Lake Appert.

I wondered how old the eagle was, so I asked some sharp bird-watching friends hwo old they thought the eagle was.

Here are the answers:

"The eagle appears to be a second year bird probably going into its third year. Three-year-olds often are mistaken for Ospreys because they have a similar face pattern. Your bird hasn't quite gotten there yet"

"Saw it twice yesterday late afternoon, up close with the bins, in flight as it passed by the Warden's Watch. Had lots of white on belly and undersides; some ragged trailing edges on the wings (which indicates, I think I read once, that it's in process of molting out of its very first flight feathers; and something of a white triangle on back. So I'd put it somewhere in its second year. Behavior was also sort of "juvenile" in that it made a lot of amateur half-hearted moves toward the ducks and geese sitting on the lake. None successful. More clueless than playful. Clearly in the learning mode. But I'm no expert. Cheers!"

So I'm thinking a two-year-old.

Thanks for everyone's help!

Can you identify this trio? Do they remind you of a song? By whom?

(A big thank you to John Pastore for these Celery Farm photos!) 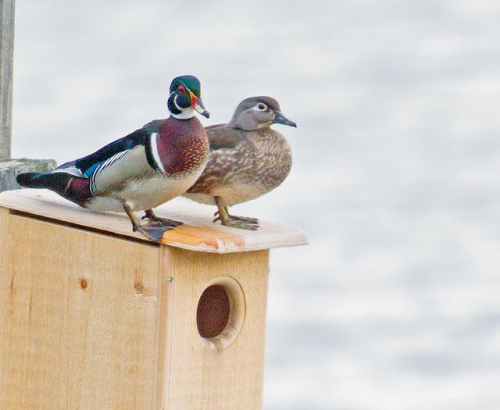 Tried to think of  a Valentine's Day-themed avian mystery but failed.

So instead of a mystery, I thought I'd post one of my all-time Celery Farm shots -- by Jerry Barrack. (No surprise.)

Mini-mystery: Where have you seen this photo before? (Look how nice and new the duck box is!)

Answered correctly by John Pastore: It's on the front of Fyke's Celery Farm brochure. (Congrats, John.)

I was pleased to see a Bald Eagle on Lake Appert in the Celery Farm on Saturday, but Joyce Delaney of Park Ridge took the cake when it comes to seeing great birds during this weekend's Great Backyard Bird Count.

An American Woodcock in her yard!

Let me know if you can top that.

By the way, American Woodcocks are the topic of the talk at the next Fyke meeting on Friday. Free and open to all!

These are amazing birds.