A Prose Poem to Cap the Year 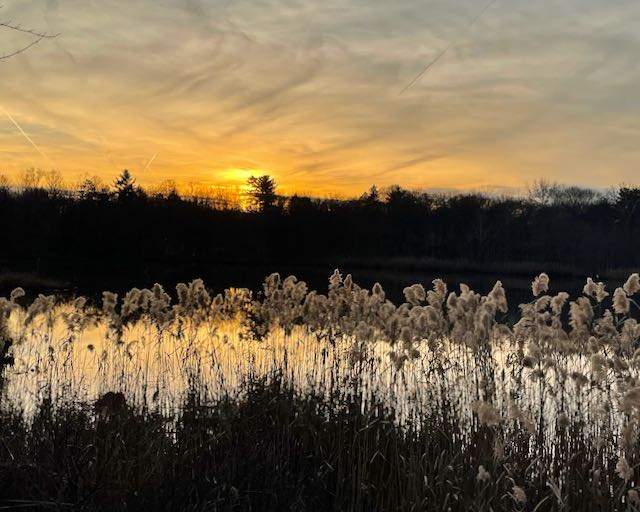 My long-distance friend Pat Price wrote this prose poem after seeing my photo of a sunset from the Celery Farm. Today seemed like a perfect day to post it. Pat, formerly Pat Creighton of Allendale, is also a friend of Stiles Thomas and his family.

It was in my Latin textbooks that I first saw pictures of reeds adorning old artifacts and frescoes.  They’ve always drawn my attention and held a soft spot in my heart along with the tales of Homer and Ovid.

Reeds at Sunset
It never gets old, this sight. There they stand row upon row, the many sisters of a water nymph,
singing Vespers to a setting sun. Beauties all, their reed-thin bodies, their shaggy manes, sing a
sweet, plaintive tune that only a few can hear. A reed field first recorded on a water jug carried
by a Vestal Virgin, and again on frescoed walls in a Roman bath. A subject worthy of Thomas
Cole. An enchanted place where I’d like to be.

There in the dark embankment you will find the original three, all daughters of a Titan – the
elm, the willow, the poplar. Collectively they provide a roost for the birds of the air and shelter
for creatures of the ground. There you’ll find the hawk who sleeps with one eye open as well as
a monstrous hulk of a tortoise who once held up the world but now snaps bones of the
unsuspecting. He launches his body into the lake with the deft stealth of a submarine and
watches, nose up, suspicious at the arrival of a boy, accompanied by an ancestor, who seeks to
fish the stream of the boy’s imagination. And who’s to say that the pink flip-flop snagged on the
end of his muck encrusted pole is not in fact the sandal of a swift-footed Hermes, or a piece of
chicken wire the shield of proud Achilles?

The boy will grow up to become a man who dedicates himself to this parcel of land. A marsh
warden, he’ll photograph its beauty, bear witness to the scenes, protect it and record it all for
posterity. No creature will be overlooked, no plaintive song will go unheard. And when he falls
and cracks some ribs the birds will hover and call “alarums” until help arrives. The laying goose
will drive him off in Spring and Fox will eat his sandwich and if he neglects to clear the culvert,
Brook will overflow. Little children everywhere will come to hear his stories.

Along Parnell’s Path there comes an ancient man with walking stick and shocking white hair. He knows every secret of these woods and is rumored to be himself a bird. I stop to tell him my
observations and ask him what he thinks. He pauses for a moment, seemingly speechless, then
lets out a deep guttural croak, unfurls two great white wings, and lifts off over the lake toward
the Warden’s Watch - a sprig of celery in his bill. When evening comes, the bats arrive and run
reconnaissance across the water - they are the Flying Foxes of the air.

“Scattering” it’s called when the sun explodes upon the horizon and gives up its battle with
encroaching Night. It throws off its precious cargo of golden hues to all those below to sanctify
a day that can never come again. For each day is singular and never quite the same. Reeds at
sunset. 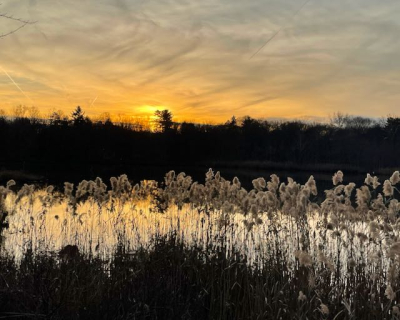 A Hummingbird Record for Allendale 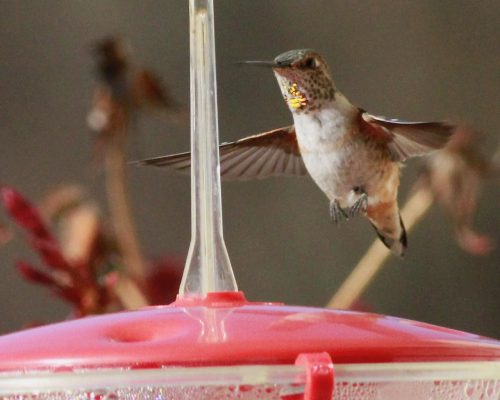 The bird is usually seen out West.

I learned the news from the current issue of New Jersey Audubon Magazine.

The picture that was used by the NJ records committee appeared very small in the magazine, so thought I would post a few more, and bigger.

(It is a stunning bird.)

You can read more about the hummingbird here: 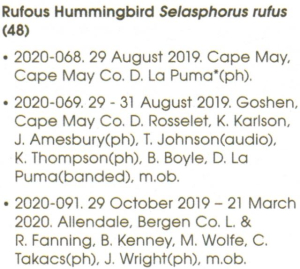 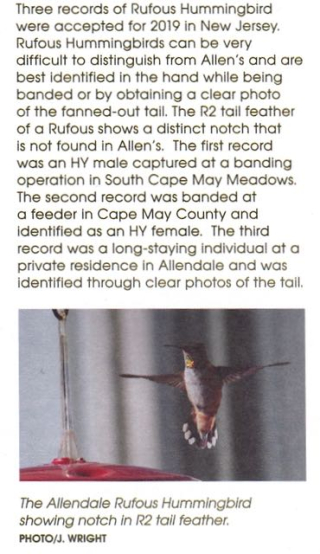 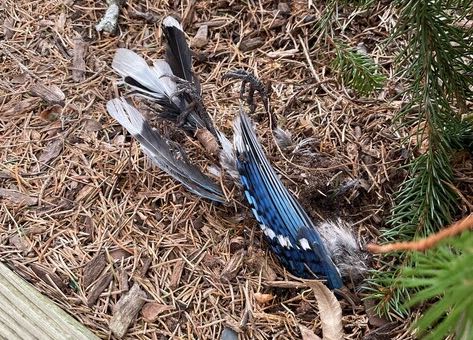 Charlie West shared this photo recently -- of a Blue Jay buried head-first in his front yard.

Any idea whodunit? (Besides the sparrow, with his bow and arrow.) 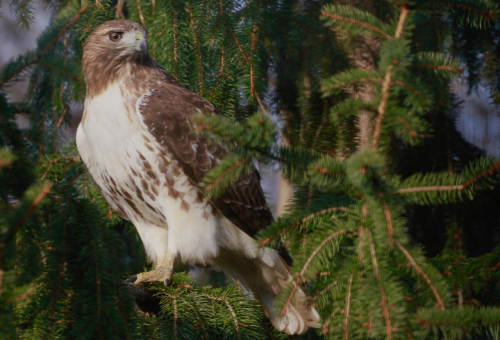 Two decades ago, Patty and I bought a live Christmas tree and planted it in the backyard.

We had a pretty cool ornament arrive yesterday afternoon. (Photographed from inside our house.) 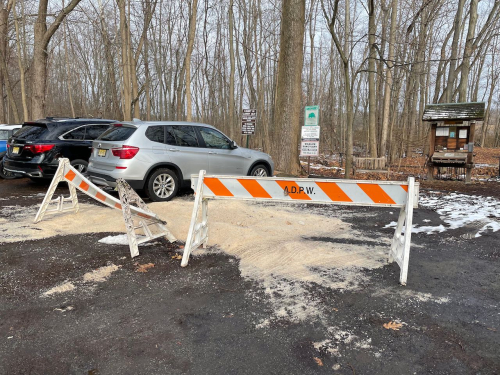 Please steer clear and do not walk through the salt.
We're trying to keep it out of the nearby waterways and Lake Appert.
The town has been notified. I have put up sawhorses in the meantime.
Thank you!