Origin of the Fyke Nature Assoc.

There has been some discussion of late concerning how and why the Fyke Nature Association was established. Perhaps this 1954 clipping from The Bergen Evening Record will help.

(In the 1980s, Fyke played a key role in establishing the Celery Farm Natural Area.) You can download a pdf of the article here: 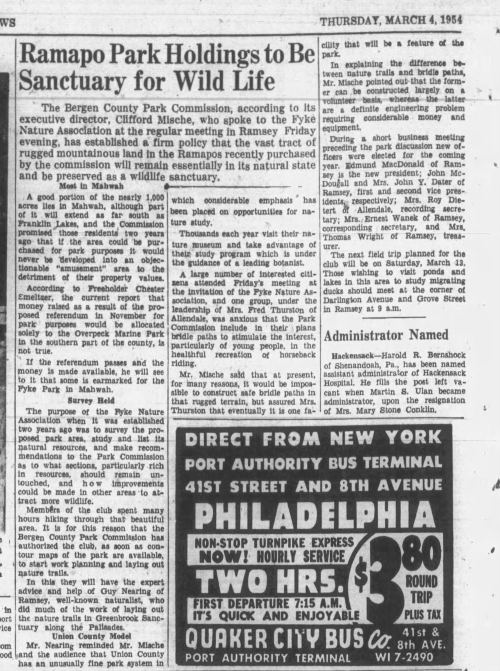 THURSDAY, MARCH 4, 1954 in Ramapo Park Holdings to Be Sanctuary for Wild Life The Bergen County Park Commission, according to Its executive director, Clifford Mische, who spoke to the Fyke Nature Association at the regular meeting in Ramsey Friday evening, has established a firm policy that the vast tract of rugged mountainous land In the Ramapos recently purchased by the commission will remain essentially In its natural state and be preserved as a wildlife sanctuary. . . Mod in Mahwah .ii. - A good portion of the nearly 1,000 acres Ilea in Mahwah, although part of It will extend as far south as Franklin Jtkea, and the Commission promised those residents two years ago that If the area could be purchased for park purposes It would never be developed Into an objectionable amusement" area to the detriment of their property value. According to Freeholder Chester Cmeltxer, the current report that money raised aa a result of the proposed referendum In November for park-' purposes would be allocated solely to the Overpeck Marine Park In the southern part of the county, la not true. 1 If the referendum passes and the money la made available, he will see to It that some la earmarked for the Fyke Park In Mahwah. Survey Bell The purpose of the Fyke Nature Association when It was established two years ago was to survey the proposed park area, study and list Its natural resources, and make recommendations to the Park Commission as to what sections, particularly rich in resources, should remain untouched, and how Improvements could be made In other areas -to attract more wildlife. Members of the club spent many hours hiking through that beautiful area. It Is for this reason that the Bergen County Park Commission has authorized the club, as soon as contour maps of the park are available, to start work planning and laying out nature trails. . - In this they will have the expert advice and help of Guy Nearing of Ramsey, well-known naturalist, who did much of the work of laying out the nature trails in Greenbrook Sanctuary along the Palisades. Union County Model Mr. Nearing reminded Mr. Mlscho and the audience that Union County has an unusually fine park system In which considerable emphasis has been placed on opportunities for nature study. ' v . - Thousands each year visit their nature museum and take advantage of the! etudy program which is under the guidance of a leading botanist. A large number of Interested citi-aens attended Fridays meeting at the Invitation of the Fyke Nature Association, and one group, under the leadership of Mrs. Fred Thurston of Allendale, was anxious that the Park Commission Include In their - plans bridle paths to stimulate the Interest, particularly of young people, In the healthful recreation of horseback riding. , Mr. Mische said that at present, for many reasons, It would be impossible to construct safe bridle paths In that rugged terrain, but assured Mrs. Thurston that eventually It Is one facilty that will be a feature of the park. In explaining the difference be-tween nature trails and bridle paths, Mr. Mische pointed out that the former can be constructed largely on a volunteer basis, where the latter -are a definite engineering problem requiring considerable - money and equipment. During a short business meeting preceding the park discussion new officers were elected for the coming year. Edmund MacDonald of Ramsey is the new president; John Mc-Doulall and Mrs. John Y. Dater of Ramsey, first and second vice presidents respectively; Mrs. Roy Dle-tert fit Allendale, recording secretary; Mrs. Ernest Wanek of Ramsey, corresponding secretary, and Mr. Thomas Wright of Ramsey, treasurer. The next field trip planned for the club wUl be on Saturday, March 13. Those wishing to visit ponds and lakes in this area to study migrating ducks should meet at the earner ol Darlington Avenue and Grove Street In Ramsey at 9 am. Administrator Named Hackensack Harold R. Bernshock of Shenandoah, Pa., has been named assistant administrator of Hackensack Hospital. He fills the post left vacant when Martin S. Ulan became administrator, upon the resignation of Mrs. Mary Stone Conklin.

Origin of the Fyke Nature Assoc.

There has been some discussion of late concerning how and why the Fyke Nature Association was established. Perhaps this 1954 clipping from The Bergen Evening Record will help.

(In the 1980s, Fyke played a key role in establishing the Celery Farm Natural Area.) You can download a pdf of the article here: