My Thanksgiving Column for The Record 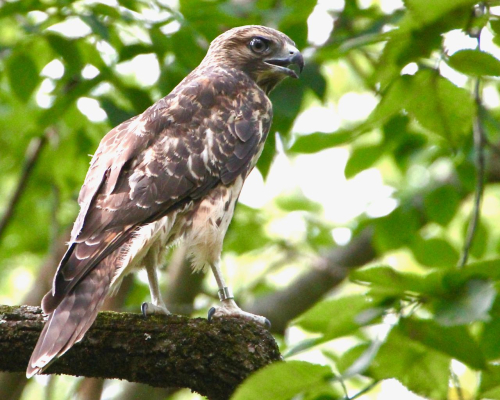 Susan the red-shouldered hawk perches on a branch after her release near The Raptor Trust. Credit: Jim Wright

Since my column ran on Thanksgiving this year, I thought I'd write about two reasons I'm thankful as a birder -- Red-shouldered Hawks of Allendale and The Raptor Trust. Seems like they go hand-in-hand.

By Jim Wright
Special to The Record

It’s not every year this column runs on Thanksgiving. The other two times, I praised juncos and reported on the wild turkey’s comeback in North Jersey.

I am happy to report the juncos have returned, and the wild turkeys are thriving as well (although some might say a little too much).

The turkey column still makes me cringe. It reminds me of one of my worst writing lapses ever. I wrote: “Wild turkeys are also surprising examples of poultry in motion. One day back when I was a competitive runner, I saw a wild turkey on the road ahead and thought I’d try to catch up to him. ...

“I was embarrassed a turkey could outrace me so effortlessly -- until I learned these birds can run as fast as 55 miles an hour (wouldn’t want to break the posted speed limit).”

When a friend pointed out that turkeys can run 15 miles an hour -- not 55 mph -- I agonized over my gaffe for weeks. Upon further reflection, I do think that some turkeys might run that fast -- at least on Thanksgiving morning.

This year I’d like to give thanks for two things near and dear to me, red-shouldered hawks and The Raptor Trust. The two go hand in hand.

I became acquainted with The Raptor Trust, an avian hospital and rehabilitation center near the Great Swamp, back in March 2007. That’s when a red-shouldered hawk in nearby Ramsey flew into a window and knocked itself unconscious.

My friend Stiles Thomas and I gathered the stunned bird, put it in a ventilated cardboard carton, and drove it 40 miles to the bird infirmary. It died soon after. Our local nature club paid to have it taxidermied, and it’s now part of an educational exhibit at the center.

A similar calamity occurred the following year, but this time the center nursed the hawk back to health and banded it, and Stiles released the bird at the local nature preserve. He named it Laura, after the homeowner who reported the injured bird, and Laura the hawk raised a family in Allendale each spring for a  few years.

This spring, another set of red-shoulders nested in Allendale, and one of the two chicks fell out of the nest. It was taken to -- you guessed it -- where it was diagnosed with a few maladies, including a lung problem that likely occurred when it fell.

The Raptor Trust nursed the young red-shoulder back to health. It turned out that the bird was a “she.” After an eight-week rehab, she was released into the wild a quarter-mile from the avian infirmary.

We named her “Susan,” after the local resident who found the injured bird. Just a small way of saying thanks.

Susan may yet fly home. If you see a young red-shoulder with a band on her leg near Allendale, please let me know.

My Thanksgiving Column for The Record

Susan the red-shouldered hawk perches on a branch after her release near The Raptor Trust. Credit: Jim Wright

Since my column ran on Thanksgiving this year, I thought I'd write about two reasons I'm thankful as a birder -- Red-shouldered Hawks of Allendale and The Raptor Trust. Seems like they go hand-in-hand.