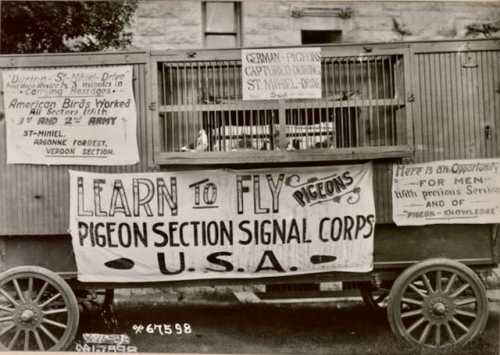 My column in The Record and other USA Today papers in New Jersey today is about the heroic military pigeons of World War I -- some very brave avian aviators.

Since today is Veterans Day --  a.k.a Armistice Day, 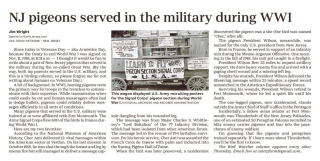 because the treaty to end World War I was signed on Nov. 11, 1918, at 11:11 a.m. --  I thought it would be fun to tell about a pair of  New Jersey pigeons that served in the military during the so-called Great War.

(By the way,, both my parents served in the U.S. military, and this is a birding column, so please forgive me for not writing about humans on Veterans Day.)

A bit of background: In WWI, homing pigeons were the primary way for troops in the trenches to communicate with their superiors. While transmission wires could easily be cut and human messengers often had to dodge bullets, pigeons could reliably deliver messages efficiently in all sorts of conditions.

Many pigeons that served in the U.S.military were trained at or were affiliated with Fort Monmouth.  The Army Signal Corps flew 600 of the birds in France during World War I.

Here are my two favorites:

According to the National Museum of American History, Cher Ami delivered 12 vital messages within the American sector at Verdun. On his last mission in October 1918, he was shot through the breast and leg by enemy fire but still managed to deliver a message capsule dangling from his wounded leg.

The message was from Major Charles S. Whittlesey's "Lost Battalion" of the 77 Infantry Division, which had been isolated from other American forces. The message led to the rescue of 194 battalion survivors.  For his heroic service, Cher Ami was awarded the French Croix de Guerre with palm and inducted into the Racing Pigeon Hall of Fame.

When the bird was later preserved, a taxidermist discovered the pigeon was a she. (The bird was named “Cher,” after all.)

The pigeon President Wilson, meanwhile, was named for the only U.S. president from New Jersey.

Born in France, he served in support of an infantry unit during the Meuse-Argonne Offensive. One morning in the fall of 1918, his unit got caught in a firefight.

Despite his wounds, President Wilson delivered the lifesaving message within twenty-five minutes, a speed record unmatched in the American Expeditionary Forces.

Surviving his wounds, President Wilson retired to Fort Monmouth, where he led a quiet life until his death.

The one-legged pigeon, now taxidermied, stands  outside the Army Chief of Staff's office in the Pentagon

Incidentally, a fellow avian aviator at Fort Monmouth was Thunderbolt of the New Jersey Palisades, one of an estimated 50 Peregrine Falcons recruited to blitz enemy carrier pigeons and tear into the parachutes of enemy soldiers.

I’m guessing that the pigeons and peregrines trained separately. If I learn more about Thunderbolt, you’ll be the first to know.

My column in The Record and other USA Today papers in New Jersey today is about the heroic military pigeons of World War I -- some very brave avian aviators.