My Column: This Bird Has a Great Memory 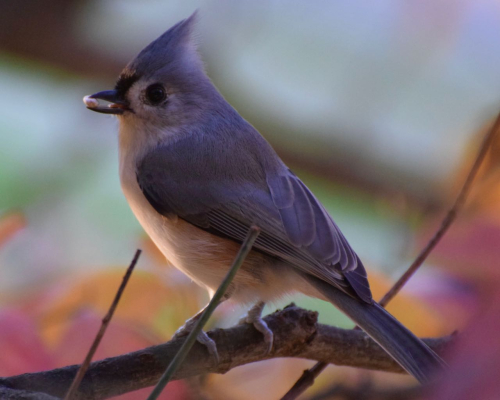 My column for The Record and other USA Today newspapers in New Jersey is about the Tufted Titmouse and its incredible ability to remember where it stores seeds.

Aside from the now-arriving dark-eyed juncos, the

tufted titmouse just might be the most unassuming bird in your backyard.
But one would be foolish to sell it short. The tufted titmouse is one smart bird -- with recall capabilities so powerful that Columbia University researchers have been studying it in hopes that it will teach us how to improve human memory.

Ever notice how a titmouse will fly to the bird feeder, grab a seed and fly away -- only to repeat the action over and over.  It turns out that the titmouse not only stashes thousands of seeds for later consumption, but it can also remember all the locations.

This feat is especially impressive when you consider the entire titmouse weighs half an ounce.

(This stands in stark contrast to your basic backyard squirrel. Scientists have found that it, too, stashes food all over the place. The squirrel, however, forgets where it hid many of the nuts.  Some of the nuts go on to become trees, helping the ecosytem.)

Why does the titmouse have that incredible ability to remember all those cached seeds?

As reported in Columbia Magazine, principal investigator Dmitriy Aronov and his team of neuroscientists discovered that the titmouse has a specialized brain region that makes mental maps that enable it to remember all of those locations where it has stashed seeds.

The researchers say their work might one day be used to inform the treatment of neuro-degenerative diseases that damage memory, including Alzheimer’s.

The only obvious hint that there might be a dynamic bird under that drab exterior is that distinctive crest of feathers atop its head that accounts for the “tufted” part of its name. “Titmouse,” by the way, apparently comes from the 14th-century old English words “tit” and “mase,” which mean “small bird.”

According to the American Bird Conservancy, “Mase eventually became obsolete and this part of the name morphed into the familiar word ‘mouse,’ a convenient switch because the quick-moving little gray bird probably reminded people of the small rodent.”

As you’ve probably noticed, the titmouse often hangs out with black-capped chickadees, which are their avian cousins and which possess some of those same seed-stash recall capabilities.

Another cool thing about the titmouse is that it’s a leading member of the avian neighborhood watch. When alarmed, it makes a distinctive warning call that sounds like the loudest “zzt-zzt-zzt” call you’ve ever heard.

Titmice sound the alarm to scold nearby raptors and predators, thereby warning other birds of the danger. The pishing often leads to mobbing, where crows, bluejays and other birds gang up and shout at the predator until it flies away.

Birders who try to attract birds often seek to imitate the titmouse’s warning call with a technique known as phishing. (You can’t make this stuff up.) Some folks are deemed better pishers than others, with predictable bon mots to follow.

My Column: This Bird Has a Great Memory

My column for The Record and other USA Today newspapers in New Jersey is about the Tufted Titmouse and its incredible ability to remember where it stores seeds.