Special to The Record
I call it “the print,” a large lithograph by nature artist 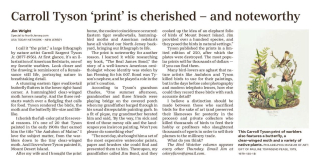 Carroll Sargent Tyson Jr. (1877-1956). At first glance, it’s an illustration of American Redstarts, one of my favorite warblers.  Look closer and the drawing is reminiscent of a Renaissance still life, portraying nature in breath-taking detail.

A stunning eastern tiger swallowtail butterfly flutters in the lower right-hand corner. A hummingbird clear-winged moth hovers nearby. And the three redstarts watch over a fledgling that calls for food. Tyson rendered the birds, the moth and the butterfly life-size and life-like.

I cherish the full-color print for several reasons. It’s one of 20 that Tyson painted in the early 1900s that earned him the title “the Audubon of Maine.” I love the subject matter, from the warblers down to the tiny clear-winged moth. And I love where Tyson painted it, Mount Desert Island.

After my wife and I brought the print home, the coolest coincidence occurred. Eastern tiger swallowtails, hummingbird moths and American redstarts have all visited our North Jersey backyard, bringing our lithograph to life.

The print is noteworthy for another reason. I learned it while researching my book, “The Real James Bond,” the story of a well-known American ornithologist whose identity was stolen by Ian Fleming for his 007. Bond was Tyson’s nephew, and he played a role in the print’s creation.

According to Tyson’s grandson Charles, “One summer afternoon, grandmother and three friends were playing bridge on the covered porch when my grandfather barged through in his usual disreputable painting garb. In a fit of pique, my grandmother berated him and said, ‘By the way, I'm sick and tired of those messy oils and the landscapes you insist on painting. Won't you please do something else!’

“The next day, she bought him a set of the most expensive watercolor paints, paper and brushes she could find and presented them to him. Thereupon, my grandfather called Jim Bond, and they cooked up the idea of an elephant folio of birds of Mount Desert Island. Jim provided over a hundred species, and they posed the birds in natural settings.”

Tyson published the prints in a limited edition of 250, after which the plates were destroyed. The most popular prints sell for thousands of dollars -- if you can find them.

Many bird-lovers are aghast that nature artists like Audubon and Tyson killed birds to use for their paintings, but in the days before color photography and modern telephoto lenses, how else could they record these birds with such accurate detail?

I believe a distinction should be made between those who sacrificed birds for the sake of art (and preserved their likenesses for posterity in the process) and private collectors who killed thousands of birds to feed their hobby or profiteers who slaughtered thousands of egrets in order to sell their plumes to the millinery trade.