My Column: That Mysterious Bird Disease 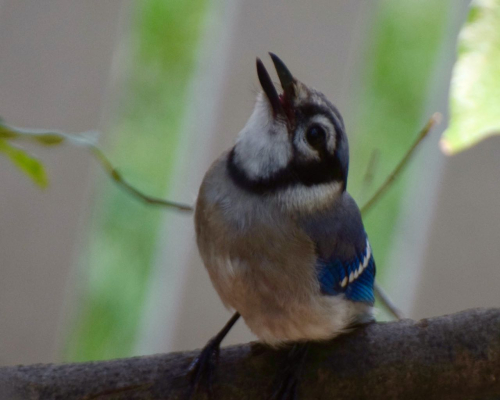 Young blue jays are among the birds affected by the mystery illness.

My column this week is all about that mysterious bird disease affecting feeder birds in several states. (Photo above by Barbara Dilger. Thanks, Barbara).

In recent weeks, New Jersey and other Eastern

states have sounded the alarm about a mysterious illness killing songbirds. Symptoms of the disease include crusty or swollen eyes and -- even more troubling -- seizures and lack of coordination.
So many states have issued advisories that it has sometimes been challenging to understand what’s going on and how to proceed if you feed birds.

The Bird Watcher looked to Dr. Nicole Lewis, the pathologist for New Jersey’s Division of Fish & Wildlife, to get the straight scoop.

Any findings on the cause of this outbreak?

At this time, we still have not determined a cause, although we have ruled out several diseases including avian influenza, West Nile Virus, salmonella, a variety of parasites, pesticides and insecticides, as well as additional potential viruses, bacteria and fungi.

The largest majority of impacted birds have been blue jays, starlings, grackles and --  to a lesser degree -- robins and cardinals. This illness also appears to only be impacting hatchlings and fledglings. It has not been impacting adult birds.

Please note: To date, there have been no reports in humans, pets or any other animals.

How many states are affected?

Should everyone take their feeders down?

Feeders should only be taken down if residents have had sick or dead birds on their property or if they receive additional guidance from us.

Otherwise, it is recommended that residents regularly clean their feeders and birdbaths areas where birds regularly frequent and congregate.

What’s the best way to clean feeders and birdbaths?

Residents should use a 10 percent bleach solution and allow the feeders and birdbaths to air dry.

How long should residents who have found sick or dead birds remove their birdfeeders?

Either until the situation resolves or we provide additional guidance, which will be posted on our webpage and social channels.

Does this include hummingbird feeders?

No. At this time, hummingbirds do not appear to be impacted by this issue, and therefore feeders can remain up.

If people see sick or dead birds on their property -- hatchlings or fledglings specifically -- they can wear gloves and double-bag the bird. and then dispose of it in their regular garbage. However, we would like to receive a report of it to better understand the potential scale of this issue in New Jersey.  Send the information to nicole.lewis@dep.nj.gov

Fieldnotes:  Tickets are still available for next month’s Purple Martin Spectacular along the Maurice River in South Jersey. The four-night event, Aug. 11-14, features a three-hour cruise to witness upwards of 1.2 million purple martins gather in to prepare for their long migration to South America.

My Column: That Mysterious Bird Disease

Young blue jays are among the birds affected by the mystery illness.

My column this week is all about that mysterious bird disease affecting feeder birds in several states. (Photo above by Barbara Dilger. Thanks, Barbara).