In Memory of Pook the Cat 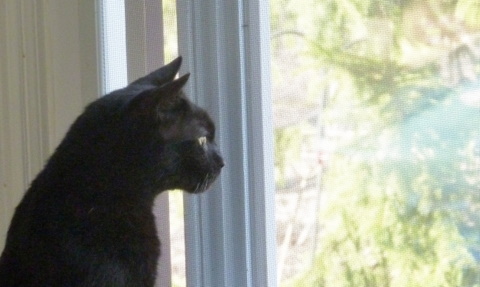 Our wonderful cat Pook died after a short illness last week. I mention it here because she was a terrific (indoor) birding cat.

My wife Patty likes to watch birds almost as much as I do, but the real bird watcher in our house is Pook, our black cat.

With no real job or household duties aside from killing an occasional bug, she spends most of her daytime hours sitting on the table by the picture window and watching the parade of birds going to our backyard feeders.

For Pook, it’s the feline version of Public Television -- seldom exciting but commercial-free.

I don’t mean to brag, but Pookie is getting to be a pretty good birder. She can ID woodpeckers, chickadees and mourning doves, because she makes a different weird little noise depending on the species.

Downy woodpeckers are particularly vexatious for some reason, eliciting a weird “ack ack ack’ noise from her that I mistook for a furball at first.

As best I figure, Pook has a yard list of 30 species or so. She could do better if she could ID all the different sparrows but, then again, so could I.

Pook particularly enjoyed this past winter because of all the snow. The yard birds were especially easy to spot against a white background.

Pook’s fascination with birds had not been without sacrifices on our part. We have removed the feeders attached by suction cup to our windows.

We were getting great looks at woodpeckers at the nut-suet feeders, but Pookie was beside herself -- even tried scaling the window screens. We didn’t even consider putting up the window nectar feeder for hummingbirds last summer. Pook would have gone apoplectic. 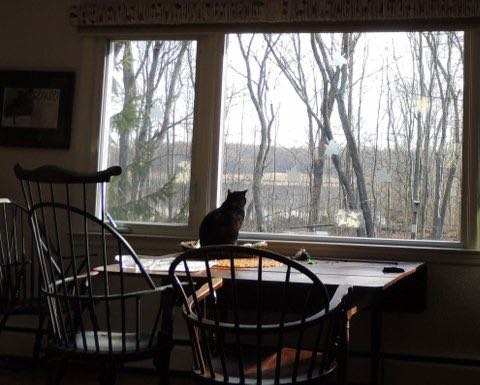 As you may have figured, Pook is an indoors-only cat, even though she was once a street cat in Brooklyn. We do so not only because we love birds but because we love Pook.

We have had many other cats over the years, up in Bellvale, N.Y., and allowed them outside, all with the same sad result. They were hit by cars or, in the case of Dirty Harry, exposed to a poison.

That’s one reason the American Humane Association strongly encourages owners of domestic cats in urban and suburban areas to keep them indoors. Other reasons include parasites (ticks and fleas or toxic chemicals, anyone?) and diseases, including rabies and feline leukemia.

As for protecting birds, keeping cats inside is a no-brainer.   Few cat owners like to hear this, but the evidence keeps growing that domestic cats are a leading killer of North American birds.

In January, researchers from the Smithsonian Institution and Towson University published a first-ever study in the Journal of Ornithology on the number of young birds killed by domestic cats on the prowl.

The study, which focused on baby gray catbird deaths in the Washington, D.C., suburbs, found that cats were the primary culprit, responsible for nearly half of the deaths from predators. (Sad to say, this gives a new meaning to their name, “catbird.”)

The American Bird Conservancy estimates that cats kill hundreds of millions of birds in the United States each year. Pook is doing her part to keep the bird death rates down. How about you? 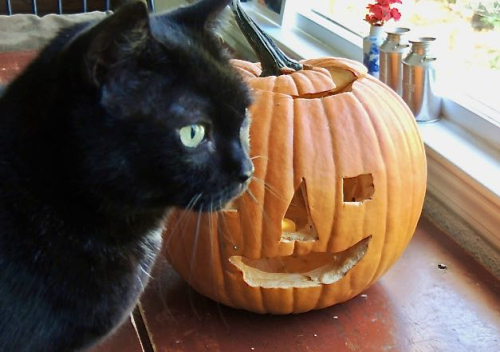 In Memory of Pook the Cat

Our wonderful cat Pook died after a short illness last week. I mention it here because she was a terrific (indoor) birding cat.