My Column: Do Your Birding Homework! 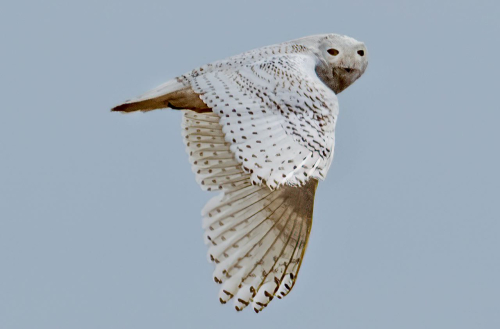 My column for The Record and other USA Today Newspapers in New Jersey is all about getting help when you're visiting a new birding spot.

It helped me see a Snowy Owl in Massachusetts last month. (Photo by Seth Brandes)

Now that spring is going full throttle and folks are

Before you go to a popular birding area, do your homework. Once you get there, don’t be shy.

Consider the recent trip that my wife and I took to visit friends north of Boston. We decided to visit one of the local birding treasures, the birding sanctuary on Plum Island formally known as the Parker River National Wildlife Refuge.

When we arrived, I kicked myself for not checking eBird in advance for what was being seen on Plum Island. Nonetheless, when we spotted a marsh hawk scouting the fields to the right, we knew we were in for a good afternoon.

The refuge is a series of stops with trails and blinds. At each stop I’d ask fellow birders what they had seen. Most folks shrugged. One couple mentioned that had seen a hermit thrush -- a thinking person’s robin, with the most melodious of calls.

I persisted in asking, even if my birding companions may have grown a tad weary of the same question and banter, over and over.

But that persistence paid off. We had been at the refuge about an hour when a couple responded to my question about bird sightings with, “You do know about the snowy owl, right?”

Any time you can see one of these spellbinding visitors from the north is a big deal. To see one in late April, totally unexpectedly, was beyond my greatest expectations.

We raced to the marsh where it had been spotted sitting on a post. When we reached the parking lot, another birder was just getting out of his car.

I said, “You know about the snowy owl, right?”

His name was Seth, and he had just arrived from California to see his young grandson for the first time. He figured he’d visit the legendary Plum Island while he was there.

Seth grabbed his camera and telephoto lens, and we all proceed to the edge of the marsh, where several people were looking in the same direction.

Bingo. We arrived in plenty of time to study the owl through binoculars and a spotting scope.

Suddenly, the owl took flight, and I wheeled to see a raven approaching in attack mode.

Then it was over. The owl flew off.

If we had arrived 10 minutes later, we would have missed nature’s air show.

Sharing the moment with another birder -- who’d come all that way for California -- made it even more memorable. And since he had his camera with him, I am sharing his photo of the snowy owl on the wing.

My Column: Do Your Birding Homework!

My column for The Record and other USA Today Newspapers in New Jersey is all about getting help when you're visiting a new birding spot.

It helped me see a Snowy Owl in Massachusetts last month. (Photo by Seth Brandes)