My Column: The Egg Man from Mahwah 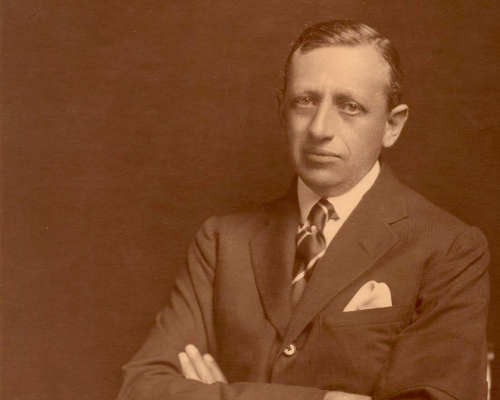 For Easter, my latest column for The Record is all about Northern New Jersey's greatest bird and egg collector, Henry O. Havemeyer of Mahwah.

Ramapo College is located on the former Havemeyer estate.

With Easter around the corner, it’s high time I wrote about a topic I’ve ignored for far too long: eggs.

I’m not talking about dyed eggs or any of the others allegedly hidden by the Easter bunny, mind you. I’m talking about 5 million far more valuable eggs, tucked away in natural history museums all over the world.

Among these birds’ eggs are several dozen donated by a noted collector from Mahwah more than a half-century ago. You might even recognize his name -- but more about the egg man later.

A report published last year in The Auk, a leading ornithology 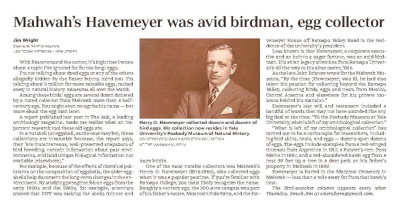 magazine, made me realize what an important research tool these old eggs are.

In a nutshell (or eggshell, as the case may be), these collections are invaluable because, the report  says, they  “are instantaneous, well-preserved snapshots of bird breeding, contain information about past environments, and hold unique biological information not available [eslewhere].”

For example, because of the effects of chemical pollutants on the composition of eggshells, the older eggshells help document the long-term changes in the environment. By studying peregrine falcon eggs from the early 1900s and the 1960s, for example, scientists proved that DDT was making the shells thinner and more brittle.

One of the most notable collectors was Mahwah’s Henry O. Havemeyer  (1876-1965) who collected eggs when it was a popular pastime. If you’re familiar with Ramapo College, you most likely recognize the name. Roughly a century ago, the 300-acre campus was part of his father’s estate, Mountain Side Farm, and the Havemeyer House off Ramapo Valley Road is the residence of the university’s president.
Less known is that Havemeyer, a corporate executive and an heir to a sugar fortune, was an avid birdman. His avian legacy stretches from Ramapo University all the way to his alma mater, Yale.

As the late John Bristow wrote for the Mahwah Museum, “By the time he [Havemeyer] was 18, he had also taken his passion for collecting beyond the Ramapo Valley, collecting birds, eggs, and nests from Mexico, Central America, and elsewhere for his private museum behind his mansion.”

Havemeyer’s last will and testament included a handful of words that may not have sounded like any big deal at the time: “To the Peabody Museum at Yale University, what is left of my ornithological collection.”
“What is left of my ornithological collection” has turned out to be a cornucopia for researchers, including bird skins, nests, and eggs -- dozens upon dozens of eggs. The eggs include examples from a red-winged tinamou from Argentina in 1917, a Forster’s tern from Maine in 1887, and a red-shouldered hawk egg from a nest 39 feet up a tree in a deer park on his father’s property in Mahwah in 1889.

Havemeyer is buried in the Maryrest Cemetery in Mahwah -- less than a mile away far from that hawk's nest.

My Column: The Egg Man from Mahwah

For Easter, my latest column for The Record is all about Northern New Jersey's greatest bird and egg collector, Henry O. Havemeyer of Mahwah.

Ramapo College is located on the former Havemeyer estate.