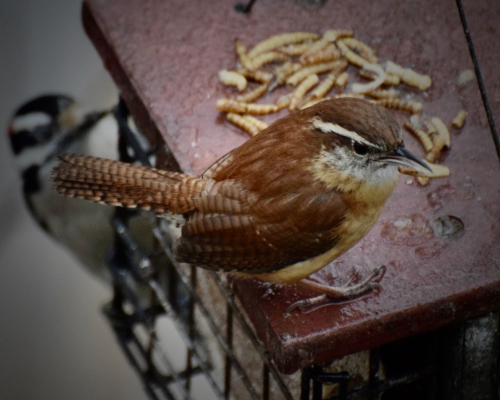 My latest column is about Carolina Wrens, which are being seen and heard more and more in North Jersey in recent years.

The column features a photo by Barbara Dilger (thanks, Barbara!()

For bird-watchers, this time of year brings a changing of the guard.

Sure, the wood ducks, killdeer and tree swallows

have been here for more than a month, and there have been sightings of plenty of other migratory species.

But those backyard standbys, dark-eyed juncos and white-throated sparrows, will soon hit the sky for their breeding grounds in Canada. In their stead are the orioles and the vanguard of the songbirds, the palm warblers and yellow-rumped warblers.

One of my favorites not only stays and sings its “cheeseburger-cheeseburger” call year-round but is being seen and heard more and more in the suburbs.

I am reminded of that phenomenon daily, a few minutes after sunrise, when my feathered alarm clock sounds loudly and repeatedly under the bedroom window.  Guess who?

That’s right: the Carolina wren, easily recognized by its clarion call and distinctive plumage -- from its upturned tail to its caramel-colored breast to its gently curved bill.

I wrote about these little dynamos back several years ago, but their increasing presence in North Jersey backyards merits another look.

Like so many birds in the metropolitan region, these wrens are being hit with a double whammy. Relentless development has meant fewer brush piles, low tangles of vegetation and other nesting locations for many species.

Increased pesticide use, meanwhile, has wreaked havoc on insects.  An analysis published in the journal Biological Conservation found that more than 40 percent of insect species are declining and a third are endangered. This decline is slowly impacting many of our backyard birds.

The good news for Carolina wrens is that they are incredibly resourceful. In the colder months, they are hanging out near our feeders more and more. In the warmer months, they’ll zip into open garages in search of spiders and other bugs.

As for nesting sites, there may be fewer natural nesting sites, but Carolina wrens are famous for their adaptability, They’ll lay their pale, spotted eggs in all kinds of human-created places.

As ornithologist Lauren D. Pharr writes on the Cool Green Science blog, “This cavity-nesting, insect-eating ... bird weighing less than a soup spoon seems to know no boundaries when it comes to choosing a home. Sometimes, we might even wonder if our efforts to provide nest boxes and brush piles somehow fail to meet the Carolina wren’s creative standards. Sometimes it’s as if they ignore the tidy nest and pick propane hoods and the insides of muddy boots instead.”

In these changing times, that just might be a good thing.

Feeder notes: In the wake of recent salmonella outbreaks linked to birds and feeders elsewhere in the United States, the Centers for Disease Control recommends cleaning feeders and birdbaths weekly or when they are dirty, and washing your hands with soap and water after touching a feeder or birdbath. The CDC also advises against feeding wild birds with your bare hands.

My latest column is about Carolina Wrens, which are being seen and heard more and more in North Jersey in recent years.

The column features a photo by Barbara Dilger (thanks, Barbara!()