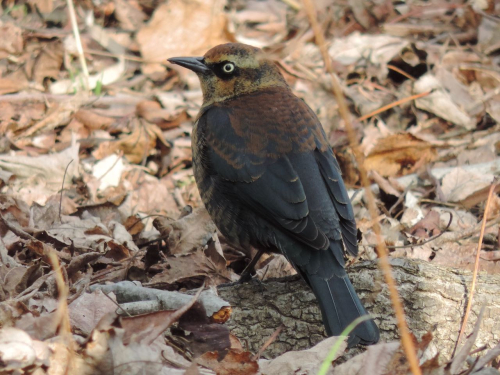 My latest column for The Record is about the troubling decline of Rusty Blackbirds.

I interviewed Bergen County Audubon Society Don Torino, who has launched a campaign to raise public awareness. (Photo above by Rich Brown).

If you’ve walked around a natural area in North Jersey lately, you may have noticed small signs in wooded wetlands sounding the alarm that rusty blackbirds are in trouble.

I see them mostly in my local nature preserve, but not very often. They are blackish, and a casual birder might mistake for grackles. If you don’t see them tossing wet leaves and searching for food, you probably won’t see them at all.

Pay attention while you can. The rusty blackbirds in our area will return to their breeding grounds in Labrador next month, and fewer may return next fall.

The rusty blackbird’s future is grim. According to the Cornell Lab of Ornithology, the rusty blackbird has undergone one of the sharpest and most mystifying recent declines of any North American songbird, with a drop of roughly 90 percent in the past half-century.

The Bergen County Audubon Society has been sounding the alarm -- and putting those rusty blackbird signs in natural areas in Closter, Tenafly, Teaneck, Allendale, Little Ferry and elsewhere in our region.

I asked Don Torino, the group’s leader, about their efforts to save this bird.

What’s so special about Rusty Blackbirds?

They’re just an amazing bird to watch. They depend on a unique habitat, wet woodlands, to hunt for small fish, insects, crustaceans, anything they can find. They have rusty colors in winter and a rusty squeaky-gate call to match.

Why should the public care?

When a species goes extinct, it’s forever. We cannot let the rusty blackbird go the way of the passenger pigeon or the Carolina parakeet.  When any species is removed from the environment, that environment is changed forever -- and not for the better. We saved the bald eagle and the peregrine falcon. The rusty blackbird is no less deserving.

What’s next? The problem for the eastern species that winters right here in New Jersey is the lack of quality wintering grounds.

If they cannot survive the winter, fewer birds will return to Labrador in the spring to breed. In our area, we all need to work together to save more wooded wetlands and stress how critical this habitat is.

Is that the reason for the signs?

Yes.  We are putting up signs in all the known rusty blackbird habitat to urge people to post their sightings on eBird and report them to the BCAS to help scientists better understand the population and migration.

We want to also bring attention to the low wet woodland habitat that is critical to the rusty and many other species like the eastern box turtle and barred owl.

If any group knows of rusty blackbird habitat, we’d be happy to get them a sign. You can email me at greatauk4@gmail.com.

My latest column for The Record is about the troubling decline of Rusty Blackbirds.

I interviewed Bergen County Audubon Society Don Torino, who has launched a campaign to raise public awareness. (Photo above by Rich Brown).