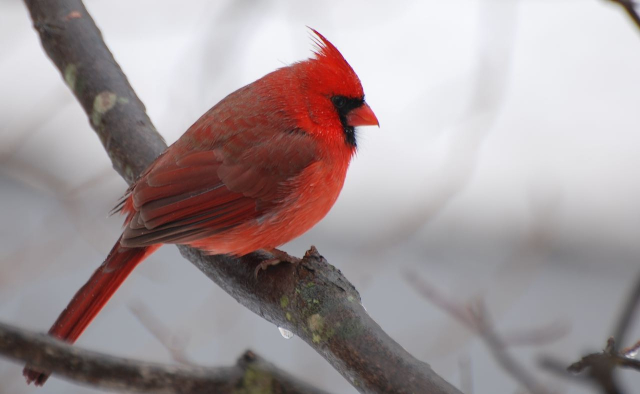 My column in The Record today sings the praises of 10 birds that many take for granted because they are so common.

I even have nice things to say about juncos.

It features a great pic of a male cardinal by Barbara Dilger (above).

Or read it here:

By “good,” they mean “unusual.” They aren’t disparaging our typical backyard buddies, but I do plead guilty to this unintended slight.

I’d like to make amends by saluting my “Top 10” common birds that some of us take for granted.

Northern Cardinal: What’s more striking than a fire-engine-red cardinal against a snowy backdrop? They’re often the first guys at the feeders after a refiling. They’ve expanded their range northward for decades, in part because more of us Yankees have been feeding birds.

White-breasted Nuthatch: You may hear these streamlined little gray-blue and white tree-climbers more often than you see them. That repeated nasal honk is them.

Tufted titmouse:  According to the Cornell Lab of Ornithology, these guys “take advantage of a bird feeder’s bounty by storing many of the seeds they get. Usually, the storage sites are within 130 feet of the feeder. The birds take only one seed per trip and usually shell the seeds before hiding them.”

Black-capped chickadee. Another big talker (and hoarder), this chickadee can be confused with its Carolina cousin, especially if you live in Central Jersey, where the southerners have been creeping northward.

Some folks call the titmouse, chickadee and white-breasted nuthatch “the three amigos” because they often hang out together.

Blue jay: This large, handsome member of the crow family has been mostly AWOL from area feeders in recent months. According to National Geographic, “Most northern birds head south for the winter... However, this migration is a bit of a mystery to scientists. Some birds winter in all parts of the blue jay's range, and some individual birds may migrate one year and not the next.” I guess they headed south this winter.

Mourning Dove: These opalescent-gray guys look stoned most of the time. They make a whistling sound in flight. They’re called mourning doves because the males make a doleful coo when they woo.

Downy woodpecker. America’s smallest woodpecker is more apt to come to feeders this time of year when insects are scarce. In summer, they’ll sneak a quick energy drink at a nearby hummingbird feeder.

Dark-eyed Junco. These drab-gray and white birds with pinkish beaks and soft silver-bell calls are fixtures around area feeders during the colder months. I like to say that when a dark-eyed junco sees its shadow on Groundhog’s Day, it means six more weeks of juncos.

My column in The Record today sings the praises of 10 birds that many take for granted because they are so common.

I even have nice things to say about juncos.

It features a great pic of a male cardinal by Barbara Dilger (above).