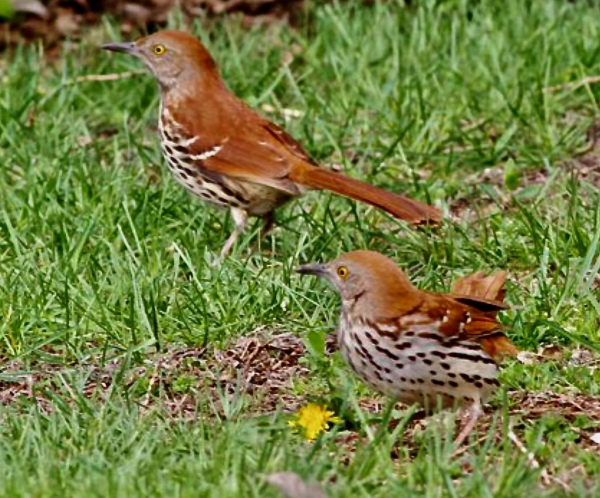 My column in The Record today is about the increasingly hard to find but very talkative Brown Thrasher, featuring an intervew with ace birder and birding tour guide Rick Wright (no relation).

or read it below:

By Jim Wright
Special to The Record

Two of my favorite slightly wacky birds are the northern mockingbird and the gray catbird. I love the way mockingbirds find a perch and perform their seemingly limitless range of birdsongs. Catbirds, meanwhile, perch in a similar catbird seat and mostly meow.

But neither holds a candle to its similar-size cousin, the brown thrasher, which can sing up to 2,000 different songs and might be the champion mimic in North America.

I love the description of their repertoire on the All About Birds website. “They include somewhat crude imitations of other species in their songs… Their calls consist of one to a few repeated notes, the most common of which sounds like a smacking kiss. Other calls include harsh slurred whistles, soft chirrups, and hissing sounds.”

I also love thrashers because I see them so seldomly, and purely by chance. I hadn’t seen one in so long last spring that when I saw one “singing” from the top of a distant tree, I didn’t realize at first what I was looking at.

The good news:  Now is the time of year to see them in North Jersey.

“September/October and April are the best bets, especially on the edges of forested parks such as Garret Mountain,” says top birder Rick Wright (No relation). “At the height of migration, especially in fall, they also occur in the salt marshes of the Meadowlands and suburban yards.”

Thrashers made a big impression on Wright when he grew up in Nebraska:  “One of my earliest bird memories, long before I discovered actual birding, was of two brown thrashers, wings spread and long russet tails raised, dancing around an intruding bull snake in my great-grandma's yard in Nebraska. It left a deep memory in me, and a fondness for the bird that was only increased once I, as a genuine birder, started to see the species more often.

Wright, who lives in Bloomfield, says that when he started birding central New Jersey in the 1980s. “Thrashers were uncommonish but not hard to find in the summertime. Nowadays, except in south Jersey, I tend to see it only a few times each spring and fall; it's a red-letter day when one spends a few hours in our yard in suburban Essex County. “

According to Wright, who leads Birds and Art tours in Europe and the Americas for Victor Emanuel Nature Tours, thrasher numbers have been decreasing in the Northeast “as a result of the loss of the messy shrubby fields and pasture edges the birds need. We would certainly have more thrashers in New Jersey if powerline cuts were managed for birds rather than for manicured convenience.”

So keep your eyes -- and ears -- peeled. If you hear a big brownish bird making smacking kisses and other weird noises, you just might see the increasing rare brown thrasher.

My column in The Record today is about the increasingly hard to find but very talkative Brown Thrasher, featuring an intervew with ace birder and birding tour guide Rick Wright (no relation).

or read it below: