Home Archives Profile Subscribe About Jim
On This Date, April 27, at the CF
Monday Morning Mystery 042720

A Classic Trip to High Mountain 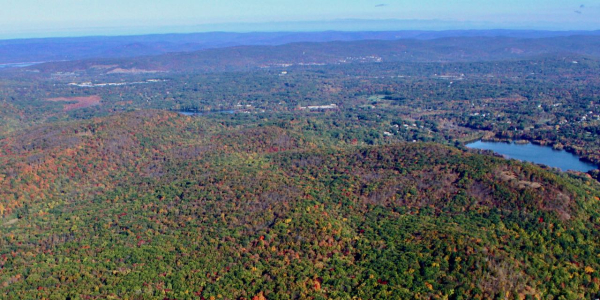 The Paterson Rambling Club was founded in 1904. The group's first hike was to the summit of High Mountain -- after they had taken a trolley to Haledon.  Joseph Rydings, the group’s leader, wrote many essays about the group's hikes over the years, and “certain choice annals” were collected in his book Country Walks in Many Fields in 1934.

Here is Rydings’ essay about High Mountain, prefaced by a note from the book's Introduction.

On each of the journeys the members study the woodland flowers and foliage, pick up specimens of fossil rock, revel in the scenery and in the grandeur of the autumn woods. On each occasion the "Ode of Welcome," composed by the founder, is sung, 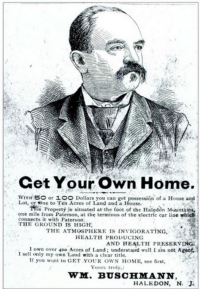 and altogether the weekly meetings are greatly enjoyed.

The first ramble to High Mountain took place under the most favorable weather conditions. Mr. Buschmann accompanied the party and generously brought a carriage which conveyed the refreshments to the top of the mountain, where a memorable meeting was held in the woods.

The woodland scenery of High Mountain was greatly enjoyed, and the flowers and plants which grew along the footpaths were explained by Joseph Rydings. Recitations from Shakespeare and other poetry was given, and altogether a most delightful time was shared by all the members.

Rural ramble, by the bramble,
O'er the mountain, by the brook;
Through the fairy woods we'll scramble, 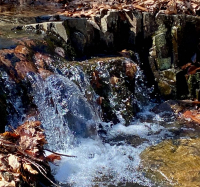 In the field or shady nook.

Leave behind all toil or sorrow,
Nature's sweets shall banish care,
With the sunshine come tomorrow
Health is free as mountain air.

“A Trip to High Mountain”

I HAVE just returned from a visit to the High Mountain. I went alone. A friend whom I had hoped would have been able to go with me discovered when we were on the point of starting out that he had a business engagement, and so your humble servant was obliged to go it alone. Happily, I am able to find a sort of companionship in buds, butterflies, and even in inanimate things, such as stones and flowers and trees. So that I was not lonely after all.

The day was beautifully fine and the cooling breezes along the mountainside helped to relieve the ascent of the usual fatigue that accompanies it when one climbs the mountain in the dog days.

It is hard for me to tell whether the present natural charms of the elevation or the delightful memories that cling to it constitute its greatest attraction. It will always be memorable as the place where the first outing of the Rambling Club took place. How well I remember the occasion! The memory comes as a pleasant picture of happy faces of friends, many of whom have passed beyond the Great Divide. Some are with us still, and

"Some have gone to lands far distant, 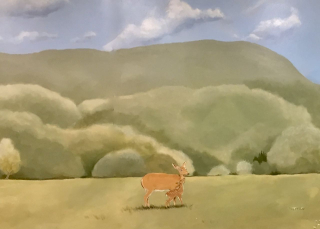 And with strangers make their home."

William Buschmann was with us, and it was then that he suggested the beautiful words of "The Ode of Welcome," to the accompaniment of Haydn's “Emperor Hymn,” and the words and the music have remained inseparable. The music was composed to do honor to the Sovereign of Austria, but Francis Joseph himself could have found no objection in hearing the glorious melody applied to a scene itself so glorious.

I climbed the mountain by the woodland path which branches off from the Haledon Turnpike a few paces beyond the entrance to the old farm that has taken to itself the name of "The Belvidere."

This is a classical age, and one cannot wonder even if an old Haledon farmstead should aspire to some sort of poetical embellishment, and one cannot criticize when the name is so appropriate as it is in this case, for the old white homestead on the hillside, nestling among the trees, is certainly beautiful. 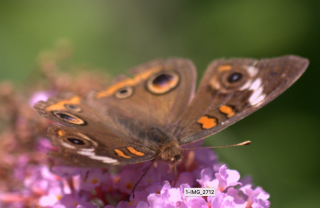 The woodland path referred to almost tempts one to spend the day beneath its shade, so pleasant it is to rest awhile and watch the flickering shadows and the dancing sunbeams pass alternately over its sylvan floor.

The buckeye butterfly apparently has no desire for another place, and I watched several specimens flitting about from one flower to another.

These mints and bergamot flowers, with here a taste of sweet fern and eglantine, furnish everything in the way of a banquet that the most epicurean butterfly could desire.

This one, the buckeye, differs from all the rest of the ephemeral tribe. While others love the sunlight, he prefers the shade, and the entomologist knows just where to find him when the sun, as now, is fast nearing the zenith.

Leaving the woodland shade I cross a fresh pasture where a young herdsman is minding some cows. I sit down beside him and try to enter into conversation; say that it is a fine morning, but this brings no response. "Schoener morgen" and "bella giornata" also fall on deaf ears, and when I speak of the magnificent canine beside him, a nice dog, the youth says: "No," so I conclude that he must belong to some nationality that my poor lingual powers cannot reach.

When I mention the word, "Polish," his face brightens up and he replies in the affirmative. 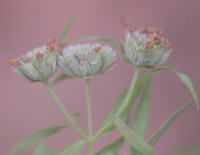 One of the cows seems inclined to wander away, so he jumps up and leaves me to my own reflections.

Crossing the meadow, I picked up a mushroom, the first I have seen this year. I never thought that they came out so soon, but here come two boys with tin cans hunt-ing for them, and I see that the lads are able to collect about a dozen of the delectable fungi before they leave the meadow.

Now the path turns aside and enters again into the woodland. I pass through a patch of wild sunflowers, and their bright golden heads shine as if they were sent to illuminate the forest. As if in contrast here are an immense number of white everlasting flowers, perfect in every detail; no destructive fly or beetle has yet violated their immaculate petals.

Where the forest trees open and let in a ray of sunlight, the mandrake grows in dense patches. This plant, so famous for its medicinal virtues, could only be found a few years ago along the roadside, but one day a stray specimen was seen at the foot of the mountain, and since then it has proceeded in one triumphant march, climbing higher and higher every year.

The progress of the mandrake has been intercepted, however, by an English flower that in some mysterious manner has found its way across the ocean, and like other English vegetable settlers, its impudence and obtrusiveness are amazing.

This plant, the viper's bugler, has reached the mountain top. It fairly revels on the summit, and is fast crowding out the columbines, poor robin, plantain, the moss pink and other f lowers that formerly flourished there.

It may become a pest, as other importations have done, but its flowers are very pretty, and the butterflies and the bees have evidently taken a great delight in it, so that it will probably repay the farmer by its honey for the barren sandy soil it seems to choose for its habitation.

I never saw the butterflies so plentiful anywhere as I find them today on the summit of this mountain. Here comes the tiger swallowtail, the fritillary, the painted lady, the admiral, the monarch, the American copper, and scores of others that one cannot stop to classify!

The panorama has lost none of its charms. One sees the white smoke of Ridgewood rising like a thin column from the surrounding forest. Wyckoff, Wortendyke and Ho-Ho-Kus just furnish a glimpse of their elegant homesteads, and where the long sketch of the Pali-sades grows faint to the vision, the town of Nyack seems to wave its little smoky handkerchief, as if it were bidding the beholder good-bye.

A friend who is well acquainted with the topography informs me that the mountain is 876 feet above sea-level. It has a rare advantage as a point of observation, on account of its bare summit. Most of the New Jersey mountains are so crowded with trees at the top that the beholder can hardly get a chance to view the surrounding landscape. 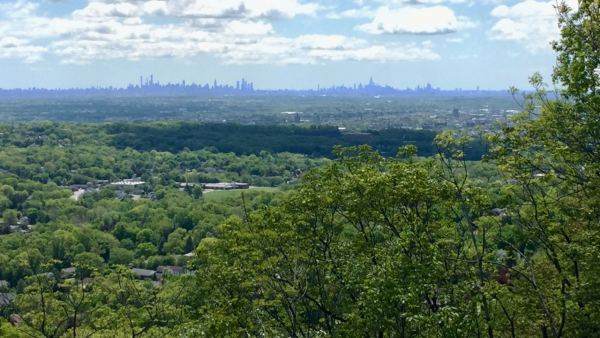 The painting in this story is from a mural in the North Haledon Library. I took the aerial photo at the beginning of this story for The Nature Conservancy with the help of LightHawk. The mint is Torrey's Mountain Mint. The butterflies are Common Buckeye and Eastern Tiger Swallowtail.

The old advertisement is for William Buschmann's real estate company. A street in Haledon is named for him. 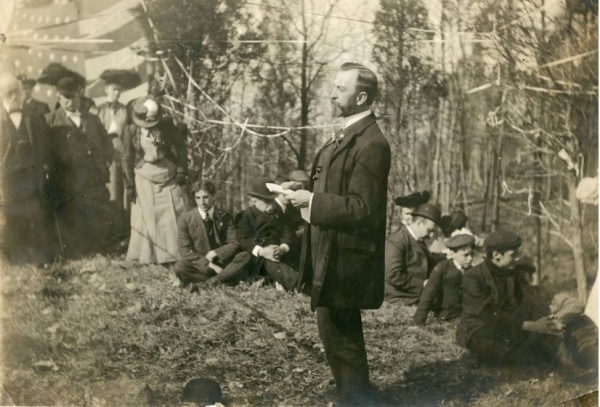 An early gathering of the Paterson Rambling Club atop High Mountain.

A Classic Trip to High Mountain

The Paterson Rambling Club was founded in 1904. The group's first hike was to the summit of High Mountain -- after they had taken a trolley to Haledon.  Joseph Rydings, the group’s leader, wrote many essays about the group's hikes over the years, and “certain choice annals” were collected in his book Country Walks in Many Fields in 1934.

Here is Rydings’ essay about High Mountain, prefaced by a note from the book's Introduction.