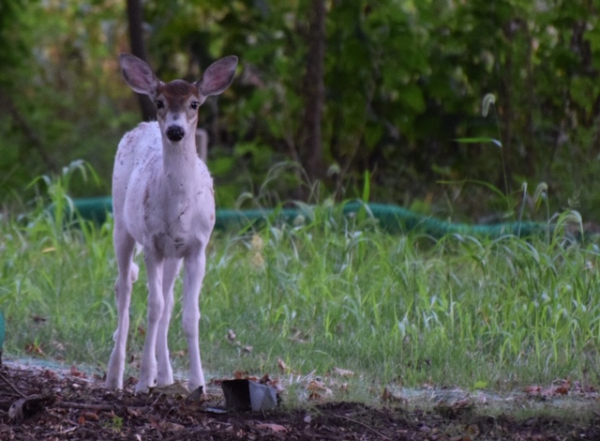 This little guy was just on the side of Road (Hopper Ave) in Waldwick with a very young deer and one adult female.

With so many deer around, it was probably inevitable we'd see more piebalds. I wrote about a piebald deer at the McFaul Nature Center for The Record more than a decade ago:

Think of her as Jane Doe.

The nearly all-white and nameless female deer, rescued as a fawn last year, has become a prominent attraction at Bergen County's nature center in Wyckoff.

The doe is mostly white because it is "piebald," a rare genetic condition that affects skin pigmentation and causes other abnormalities. The deer shall remain nameless for a very simple reason.

"Names depict pets," says Peter Both, the center's director. "Our animals are not pets. They are in captivity for a reason."

The deer came to the center from a wildlife rehabilitator in the Wanaque area, who had repaired the fawn's misshapen hoof. Such deformities are common among these uncommon deer, and once a wild animal has been in captivity, state law prohibits it from being released into the natural environment, where it would be vulnerable to predators.

Piebald deer are particularly vulnerable, Both says, because their white color makes them more conspicuous, and other common physical abnormalities such as shorter legs, splayed legs, bad hooves and somewhat misshapen heads make their chances of survival much lower.
The deer, which is tan only around her eyes, has been such an attention-getter that the staff has put up a special display in the lobby. The display points out that what people are seeing in the pen alongside several white-tailed deer is not a goat —  a common misperception —  but rather a piebald deer.

As the display explains, "Pie" means "mixed up," and "bald" means having a "white spot" (think "bald eagle," which has a white head and a white tail).
Both says he expects the McFaul piebald to live seven or eight years, or about half the life expectancy of the other white-tailed deer on exhibit at the center.

The arrival of the piebald has probably extended the stay of all the captive whitetails at the center. According to Both, wild deer have been seen so regularly on the property in the past six years that "we wondered if we really needed to have a captive population. The piebald kind of changed that dynamic a little bit."

The doe now has a job at the center -- as a teaching tool. "She helps get people to think about the fact just like people come in a variety of colors, so do animals."

Larry Herrighty, assistant director of the state Division of Fish and Wildlife, agrees that piebald deer can be quite a draw. "They're a curiosity," he says. "People like to see them and talk about them."

Herrighty says that his agency gets several reported sightings every year, and one or two are harvested by hunters each year, who typically have the deerskins preserved because they're rare."

Although few piebald deer are seen in the wild, a"Some states don't allow hunters to shoot white deer because they want to keep them going," says Herrighty, "but we make no such distinction in New Jersey."

This little guy was just on the side of Road (Hopper Ave) in Waldwick with a very young deer and one adult female.

With so many deer around, it was probably inevitable we'd see more piebalds. I wrote about a piebald deer at the McFaul Nature Center for The Record more than a decade ago: