Columns I Wish I'd Put in the e-Book: Part II 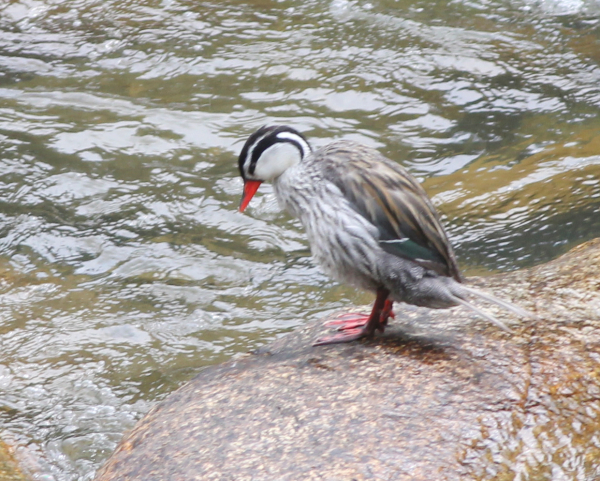 When I was compiling my favorite columns for the e-book, one of the first ones that came to mind was a column on Ecuador and Torrent Ducks.

Looking for inspiration as we dive into a brand-new year?

Consider the torrent duck, an incredible creature I saw on a recent trip to Ecuador. When it comes to dealing with adversity, this resilient South American waterfowl gets along swimmingly.

These beautiful ducks -- about the size of blue-winged teal -- spend their lives negotiating frigid rapids thousands of feet up in the Andes in search of insects and insect larvae to eat.

Their offspring lead a rocky existence as well. No preschool for these waddling toddlers: Shortly after they hatch, they must dive into the icy waters and fend for themselves.

Says pioneering torrent-duck expert Paul A. Johnsgard: “There’s no other duck in the world that’s as fascinating or amazing. For ducklings a day or two old to be able to navigate those waters and survive in those currents is beyond belief.”

According to Johnsgard, the ducks typically perch on a large boulder near the middle of a river and leap into the whitewater and disappear for 10 seconds or so, then reemerge by the same rock. They scramble back up to their perch using their long, stiffened tail feathers as a brace – in much the same way that woodpeckers use their tail feathers.

The closest thing to a torrent duck in New Jersey is the similarly death-defying harlequin duck, which feeds in fast currents along the rocky jetties by Barnegat Light this time of year.

I had first heard of these strange waterfowl on a few PBS “Nature” shows -- most recently last year’s Emmy-winning “DUCKumentary” -- and I could not believe what appeared on the screen.

To watch such behavior on TV is one thing, quite another to witness it first-hand. Small wonder, then, that one of my goals on the Ecuador trip was to see a real live torrent duck.

Fortunately, our group had booked an overnight stay at an eco-lodge near the Guango River on the eastern slope of the Andes. Not only did 15 species of hummingbirds frequent their feeders, but torrent ducks lived in the icy waters nearby. A little slice of heaven.

On the day we arrived, we scanned the frigid river and were rewarded with but a glimpse of our quarry. The following morning, we had a prolonged look at a distant male perched on a rock. We agreed that the view wasn’t great but better than nothing.

An hour later, we packed our bags, boarded the van and continued down the mountainous road, which paralleled the course of the Guango River far below.

Our group had been in the van maybe 10 minutes when our guide, Galo, shouted: “Stop the van! Torrent ducks!”

We grabbed our binoculars and cameras, scrambled out of the van, and raced to a spot with a good vantage point. Incredibly, 50 feet below us, amid swirling rapids, a male and a female torrent duck were swimming and diving like they were spending a day at a local swim club. We had perfect bird’s-eye-views of the duck we most wanted to see.

How Galo ever spotted those two ducks, I’ll never know, But the manner in which we finally saw them, against the odds, encapsulated one of the true joys of bird-watching -- to not only find a rare bird but to see the bigger picture of their existence.

At the next eco-lodge, I bought a wooden plate featuring the image of a torrent duck. It’s my reminder that whenever I feel like I am swimming against the current, I am in good company.

Columns I Wish I'd Put in the e-Book: Part II

When I was compiling my favorite columns for the e-book, one of the first ones that came to mind was a column on Ecuador and Torrent Ducks.