The video that Ben took is above. You can read his account here. (Great work, Ben!) I posted an extra item on the Duke Farms blog today -- about the threats to eagle eggs in New Jersey for much of the last century.

DDT was one huge problem. Before that, egg collectors took a surprising toll. 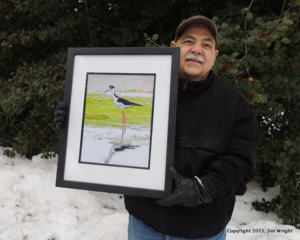 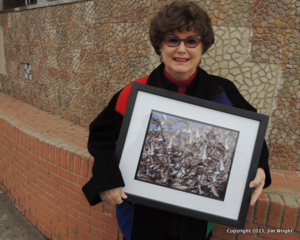 My latest column for The Record and Herald-News is about the winners of the recent Birdy 30 contest, George Greco of Paterson (left) and Marilyn Taylor of Wyckoff (right).

George, nicknamed "the Birdman of Paterson" by his neighbors, tallied an amazing 27 species. Marilyn, who won by havng her name drawn at random, had 16 species.

Congratulations and thank you to all who competed. It was a great way to warm up a cold winter weekend.

To read the column, click here. I will post the sidebar about Marilyn when it becomes available.

Alice the Eagle is in The New York Times 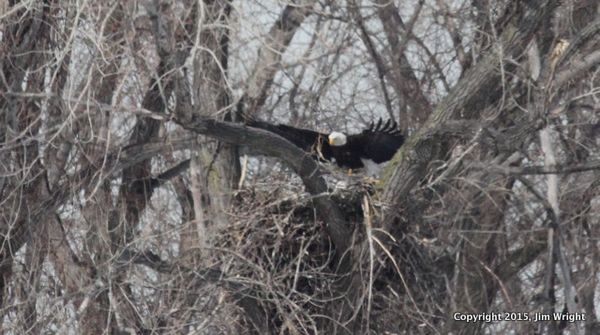 New York Times columnist Jim Dwyer recently wrote about the amazing winter influx of Bald Eagles in our region -- and our own Alice:

New York has a surprising relationship with the bald eagle, given the city’s ostentatious hostility to most life-forms. The park rangers took part in an eagle “hack” project for five years. It seems that eagles lay four eggs and the first two out of the shell tend to thrive, getting the most to eat, Mr. Mastrianni said.

The two that dawdle don’t last long. To bolster the population, scientists have been relocating the runts. In New York, the eaglets were put in an artificial nest on a platform in Inwood Hill Park, near a salt marsh at the north end of Manhattan.

“I had to climb up and put fish in there for them to eat, without them seeing me,” Mr. Mastrianni said. The juveniles grow quickly; in a few months, they actually look bigger than adults, because they have “training feathers” that are extra long.

In five years, 20 eagles were tagged and released. The number that survived is thought to be low, in keeping with a 70 percent mortality rate for young raptors, Mr. Mastrianni said. One eagle was shot. Another was hit by a train. The pride of the project is an eagle that left Inwood and flew to a nest in Overpeck County Park in Bergen County, N.J., where it has had several generations of offspring, Mr. Mastrianni said. The whereabouts of the others are unknown. There is thought to be a nest on or near Staten Island, he said.

"The pride of the project" would be our Alice, the wonderful female nesting in Ridgefield Park.

I am totally proud of Alice as well. Above is a photo of Alice in the nest yesterday.

The link to Jim Dwyer's column is here.

My Latest Duke Farms Bald Eagles Post: All About Eggs 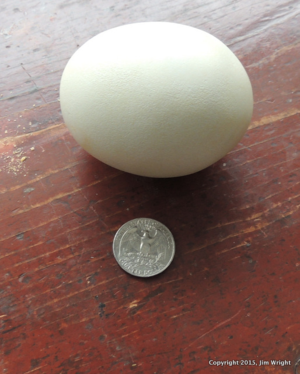 In my latest post for Duke Farms, with the help of experts, I try to address questions of concern -- including whether it's OK when the eagles leave nest (and the eggs).

Plus other fascinating facts. (BTW, the eagle egg at right is a replica. The quarter -- eagle side up-- is there for size comparison.)

Note: What the Duke Farms nesting Bald Eagles are experiencing also applies to the Ridgefield Park Bald Eagles, which appear to be incubating at least one egg.