This Friday: Stiles Thomas & Me @ Fyke 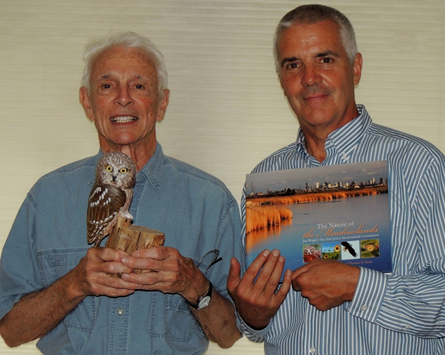 The event kicks off with Jim’s short and snappy talk and slide show about his popular coffee-table book, “The Nature of the Meadowlands,” which celebrates the amazing environmental comeback of this former land of garbage dumps and pig farms.

The second-half of this double-header is the unveiling and exhibition of Stiles’ recent bird carvings, which are both wonderful and whimsical.

A reception with refreshments for Stiles will follow.  Allendale Borough Hall is located at 500 W. Crescent Ave., Allendale. 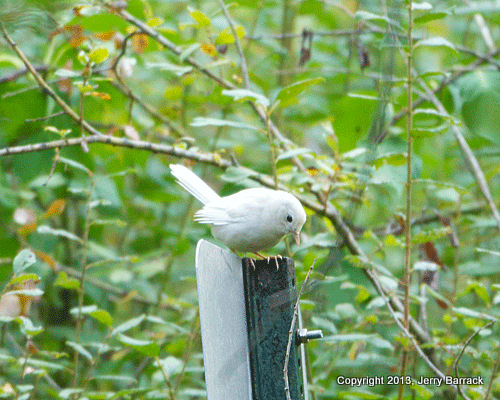 At the urging of Stiles Thomas, Jerry Barrack and I went to the Celery Farm at 7:30 a.m. today to see if we could photograph the albino Gray Catbird, a.k.a. Moby Catbird.

Jerry was not on top of his game, because it took him a full half-hour to find and photograph the bird, but he still qualified for the 50-cent reward. (I, on the other hand, didn't even see the bird.)

Jerry stayed around and got even better photos of the catbird (above, and following).  Stiles Thomas and Rob Fanning also saw the bird.

This is all as a result of Fred Weber's initial find, detailed in the logbook at the entrance to the CF on Franklin Turnpike.

As Fred points out below in the logbook entry below, and as you can see in Jerry's photos, it has dark eyes -- does that make it a leucistic catbird instead?  Your thoughts/comments would be most welcome.

Jerry Barrack managed to get a photo of the albino Gray Catbird this morning around 8 a.m. near Phair's Pond, just inside the Green Way entrance.

We will post the photo when it becomes available. The bird was first seen by Fred Weber earlier this month.

Jerry will receive the 50-cent reward and the admiration of albino Gray Catbirds everywhere. (Thanks, Fred and Jerry!)

My Latest: Hummingbirds Are Brats! 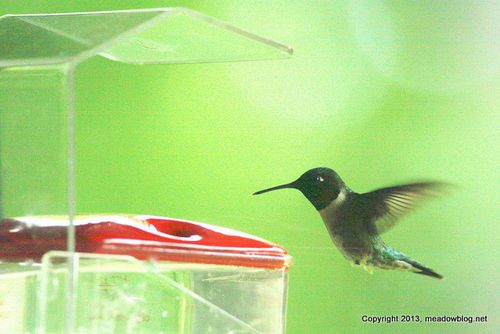 My latest column for The Record and Herald News takes a cheap shot at hummingbirds, the spoiled brats of the backyard bird world! Outrageous.

It’s not just that this aggressive pipsqueak is typically the only Eastern yard bird that insists on its own special feeder, but you also have to keep refilling it regularly with fresh sugar water.

What’s more, if you want to attract a lot of hummingbirds to your yard, you have to put up several feeders, because ruby-throats never learned to share.

As if that weren’t bad enough, now I find out I should leave my hummingbird feeder up for at least two more weeks — even though most ruby-throats have headed south. What a pain.

I have received two second-hand reports of a Great White Catbird sighting near Phair's Pond in the past two weeks.

The prevailing theory is that the bird, all white with pink legs and bill, is an albino. A lesser possibility is that it is a Turkish Angora Catbird. Whatever it is, we really need a photo of this Moby Catbird.

The Fyke Nature Association is offering to pay twenty-five cents in cold hard coinage to the first photographer who sends me a photo of this amazing catbird. I am willing to match that offer. I will also post imaginative Photo-shopped albino cat/birds as well if nothing better comes along.

I know of a photographer or two who will be out there Thursday morning, so please, no bright clothing.