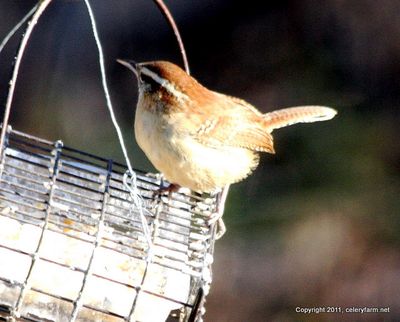 My latest "Bird Watcher" column in The Record and Herald-News is about how I went from runner to birder -- and why I stopped running in the Celery Farm.

The Concerned Citizens of Allendale will hold an Oktoberfest celebration at 7 p.m. on Friday, Sept. 30, in The Red Barn at Crestwood Lake in Allendale.

Tickets are $45 per person (adults only) and include a traditional Oktoberfest meal catered by Allendale Bar & Grill, DJ music and Oktoberfest beer donated by the Brooklyn Brewery. Feel free to BYOB.

For more information, contact Maureen Mamunes at 201-248-8240 or e-mail her at mhmamunes@yahoo.com.

Checks may be dropped off or mailed to Mamunes at 165 Forest Road, Allendale, NJ 07401. Make checks payable to "Concerned Citizens of Allendale."

All proceeds from the event go toward restoration of The John Fell House, located across Franklin Turnpike from the Celery Farm.

I found the following entry in my journal from October 2003 and thought I would share it, for what it's worth. It's the story of the Hour on the Tower crew's attempt to be the previous Celery Farm record for species seen in an hour, held by Stiles Thomas, Gordon Schultze and Charlie Mayhood.

The 2003 attempt was likely one of the first times that the Hour on the Tower was held at Pirie. I post it virtually verbatim. 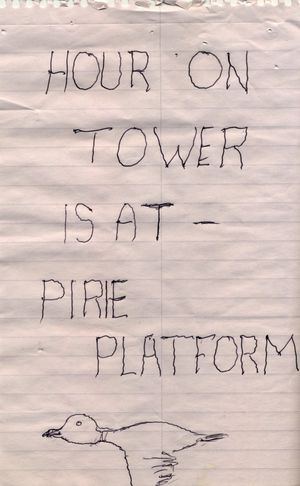 This past weekend's Hour on the Tower was supposed to be huge. Stiles predicted the day before [Saturday, Oct. 4] that we had a shot at beating the record -- 42 species spotted or heard (and confirmed) from the platform between 8 a.m. and 9 a.m. on Sunday.

Stiles, ever the field marshal, decided the best strategy was to observe from the Pirie Platform because ducks were on the mover and one typically sees more ducks from the Pirie.

So when the troops arrived on Sunday, a sign awaited them at the Warden's Watch -- HOUR ON TOWER IS - AT PIRIE PLATFORM -- topped off with a drawing of a duck the likes of which you would have seen on a junior high school boy's notepad if he drew waterfowl instead of racing cars and fighter jets.

I arrived at the Pirie precisely at 8, which meant that I was late and all the good spots were taken. Birding is serious business, especially when you are racing against time, and birders would no sooner show up at game time than a baseball player or football player would. You have to get ready, warm up, prepare. 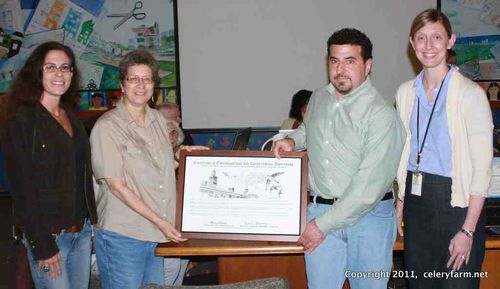 The Fyke Nature Association and Bergen County Aududon Society presented Ridgewood's George Washington Middle School with an awesome certificate last night to recognize the school's efforts to preserve a prime roost for migrating Chimney Swifts -- in the huge chimney of the school.

The certificate was the brainchild of John Workman and Kurt Muenz, who has been keeping track of the Chimney Swift activity at the school for years.

Below, a photo last night of some of the swifts enjoying the free lodging in the chimney. Lots of swifts still appearing nightly at dusk. 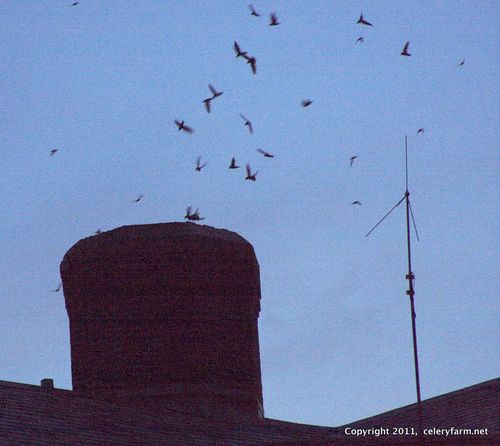 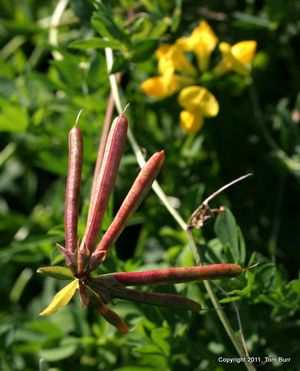 The answer to yesterday's mystery, graciously provided by Tom Burr, who writes:

"This photo shows where the Birdfoot Trefoil  got its name. They are even more convincing after they have ripened and gotten dark and scraggly."