Rob sez: "Wonderful looks at a Virginia Rail in the open (Scout Platform).
"Fred reports a Sora from there as well."
Click "Continue reading ..." for Rob's full list. 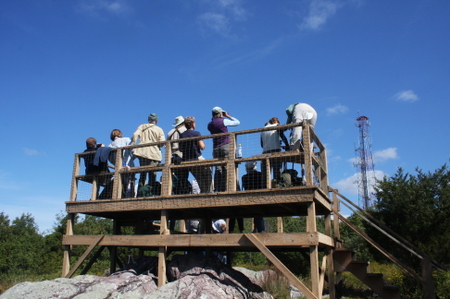 Saturday was a great day for a field trip to the Mount Peter Hawk Watch on Bellvale Mountain in Warwick, N.Y.
The temperature was moderate, the sun was warm, and raptor watchers tallied more than 300 broadwings and a bald eagle.
Click "Continue reading..." for the day's count and several shots of Fyke Nature Association members. 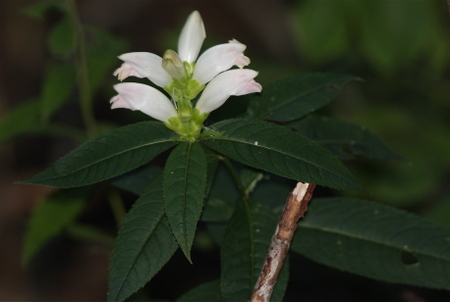 This guy is now in bloom on the trail in several places, including just past the spillway and between the Green Way meadow and the Pink Potty Bridge (Troop 59 Boy Scout Lookout).
Can anyone help with an ID?
Last week's mystery: The mystery now seems to be how a squash plant got into a pot from a native plant sale.
The good news is that the squash could well be native.  And from its lackadaisical growth, I would venture that it is definitely not invasive.
For other Monday Morning Mysteries, click here.

I HEARD AN OWL CALL MY NAME

It was about 4:30 a.m. today, and a screech owl called for about a minute outside the bedroom window.
For some reason, he thought my name was "Winnie."
When another screech owl, began to drum, they both stopped...
Yesterday, after several dickie birds mobbed the owl box, I activated the screech owl for the first time this fall. Nothing -- as nothing is expected for another month at least.
In the past four years, we have had a male screech owl move in anywhere from late October to early December, with the date getting slightly later each year.
COMING TUESDAY: Mount Peter Hawk Watch pix and report.